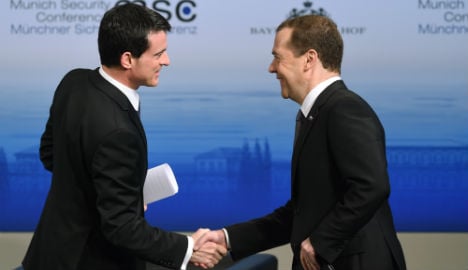 French Prime Minister Manuel Valls meets Russian prime minister Dmitry Medvedev in Munich. Photo: Christof Stache / AFP
“We have entered – we all feel it – in a new era characterized by the lasting presence of 'hyper-terrorism',” said Valls, whose country was hit by two Islamist attacks last year.
“We must be fully conscious of the threat, and react with a very great force and great lucidity. There will be attacks. Large-scale attacks. It's a certainty. This hyper-terrorism is here to stay,” he said.
Valls was speaking at the three-day security conference in the southern German city, speaking alongside Russian Prime Minister Dmitry Medvedev.
“The force of the ideological fascination is formidable, and if we have changed era it is because this hyper-terrorism is in the heart of our societies.”
Islamic State jihadists wrought havoc on the streets of Paris on November 13th, killing 130 in a series of attacks on bars, a football stadium and the Bataclan concert hall.
That came after 12 people were killed in a January attack on the Charlie Hebdo satirical news weekly, which had been in the jihadists' sights since publishing cartoons of the Prophet Mohammed in 2006.