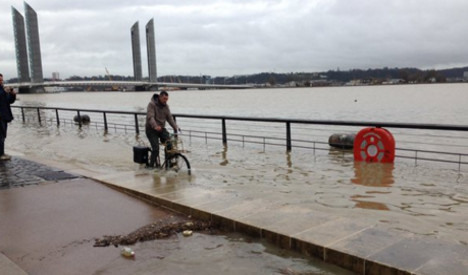 WEATHER LATEST: Much of western France on alert for high winds and coastal flooding on Friday.

Weather alerts were issued for Charente-Maritime and the Gironde in south west France on Friday after heavy rains led to flooding in several areas.

And as forecast the Garonne river in Bordeaux burst its bank and left several roads under water.

Tens of schools and nurseries had to be closed.

Low-lying villages in the region also had to be evacuated as waters rise. Flood waters are set to rise again on Saturday.

The images below show how high the river got, although it wasn't quite as bad as the level of 2014 flood.