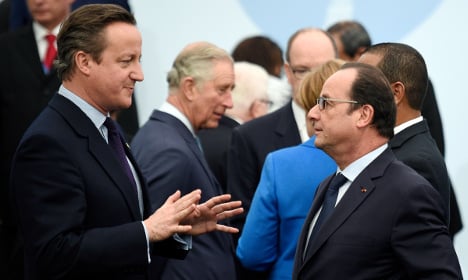 David Cameron and Francois Hollande. Photo: AFP
Negotiations on Britain's demand for key reforms, including safeguarding the pound and its financial system, are going down to the wire with officials preparing feverishly for a crunch EU leaders summit next week.
French Finance Minister Michel Sapin said Britain and its financial system belonged squarely in the European Union and that was France's position.
“Certainly, there are changes to be made, there needs to be more democracy in the workings of Europe but there are also some simple principles to be observed,” Sapin said as he arrived for a meeting of EU finance ministers in Brussels.
“The first principle is that the economic and monetary union (of the 19 eurozone countries) is going to be deepened, that it must be deepened, and on that nobody can oppose it,” he said.
“We must talk to those countries not in the euro but there can be no veto, no mechanism which could hold up this deepening (of the eurozone),” he added.
Britain's finance minister, George Osborne, said he believed there was a “real prospect” of a deal at next week's summit.
Osborne said the finance ministers would discuss among other things “how we make sure we have the right relationship between the countries in the eurozone and outside … in a way that we make sure we have the best arrangements for financial stability.”
“Getting this all right is absolutely essential to make sure we protect the citizens of the EU and of course in my point of view, to protect the citizens of Britain,” he added.
Last week, French President Francois Hollande said there should be no further changes to the compromises worked out to meet British Prime Minister David Cameron's reform demands.
European Council President Donald Tusk earlier this month compiled a package designed to avoid a “Brexit” in a referendum Cameron has promised by end-2017 but which many believe will be held this year, possibly in June.
Among the proposals, there would be a mechanism allowing non-euro countries to raise their concerns about decisions by eurozone nations which may affect their economies.
Tusk notably sought to reassure countries such as France this would not amount to giving non-euro states a final say on such matters.
Britain, along with Denmark, has an opt-out on the euro but ultimately the single currency is supposed to become the unit for the whole EU.
New states joining the now 28-nation bloc are supposed to commit themselves to adopting the currency when their economies are judged to be on par with those of their peers.