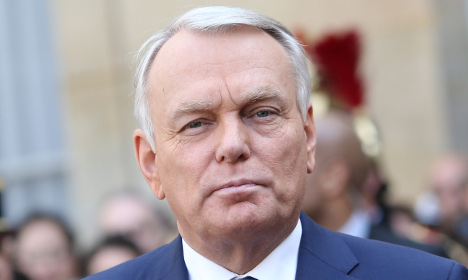 Jean-Marc Ayrault. Photo: AFP
Ayrault, 66, served as the prime minister of France between 2012 and 2014.
In a minor government shake-up, Hollande also named a member of the French Greens Party (EELV), Emmanuelle Cosse, as housing minister.
Two other ecologist politicians were named as under-secretaries in the new government.
While the reshuffle is President Hollande's effort to gather fresh political momentum with just 15 months left in office, French political analyst Bruno Cautres said that Thursday's changes were practically useless.
“I really think it's pointless, it won't change anything at all. The key ministers pretty much all remain in their same places,” he told The Local.
“It's too late for Hollande. He won't be able to make any changes in time for the elections in 2017.”
An opinion poll by the Liberation newspaper published this week showed some 75 percent of people do not want Hollande to be re-elected.
Record unemployment figures of about 10 percent are also haunting Hollande, who vowed at the start of his mandate that he would not run again if he failed to improve the jobless rate.
The reshuffle comes just one day after Laurent Fabius confirmed he was stepping aside from the foreign minister post.
Fabius, whose departure had long been rumoured, simply replied “yes” when journalists asked if he was taking part in his final cabinet meeting on Wednesday.