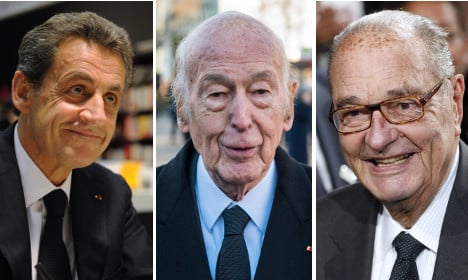 Sarkozy, Giscard, and Chirac. France's three living former presidents bag €6.2 million a year between them. Photo: AFP
Exact details of the earnings of France's former presidents and prime ministers have long been unknown, but that all changed on Tuesday thanks to a report from the French Mediapart website.
The publication gained access to detailed accounts of the annual payments made to the former heads of France, and it makes for some eye-watering reading.
The country's three surviving former presidents, for example, bag €6.2 million a year between them. €6.2 million!
Here's how it's spent. The publication shared some of the more head-turning stats that make up these payments.

Giscard, who is 90 years old, has clearly done the best of them all.
Even though he left office 35 years ago (he served from 1974 until 1981) he has kept his offices on the swanky Boulevard Saint-Germain on the Left Bank of Paris – at a cost of €276,683 per year.
The taxpayer still foots the bill for his filling up his fuel tank (€5,000 a year) and his press subscriptions (€10,571).
Sarkozy, 61, is currently the opposition leader and eyeing up the presidency in 2017. He led France from 2007 until 2012.
He gets an office on Rue de Miromesnil in the 8th arrondissement that costs €226,290 a year.
He has 26 phone lines, almost €7,000 worth of vehicle expenses, and almost €400,000 in staff salaries, according to figures obtained by France TV Info.
Chirac, 83, was president from 1995 to 2007 and prime minister on two occasions during the seventies and eighties.
He sees payments for anything from dry-cleaning to payment of his staff.
Over €200,000 goes to his offices, and over €20,000 for communications.
Former prime ministers, meanwhile, do pretty well for themselves too, with Alain Juppe leading the charge with expenses of €102,171 in 2014 alone. Close behind were Dominique de Villepin (€96K) and Jean-Pierre Raffarin at €90K.
With all this in mind, Francois Hollande is right to be smiling. The man polls suggest will soon be an ex-president looks set for a life of absolute luxury.
But it's a safe bet that some French people won't be too impressed about still having to pay for him.