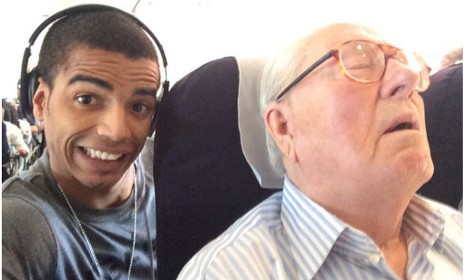 Photo: Brahim Zaibat
Zaibat was also ordered to take down the offending picture, which was tweeted more than 12,000 times when posted on December 12, ahead of regional elections in France.
The picture features far-right National Front founder Jean-Marie Le Pen, 87, his head back and mouth open as he napped on a flight between Paris and the southern city of Nice, with Zaibat grinning behind him.
“Knock them out tomorrow by going out to vote. To preserve our brotherly France!!!” Zaibat tweeted.
Le Pen sued Zaibat for invasion of privacy and copyright, seeking €50,000 ($56,000) in damages and the withdrawal of the picture which was take two years previously.
A Paris court found that while the photo “was of a humorous nature and was used to send a political message” it did violate Le Pen's exclusive right to his image, according to French law.
But the court said the snap was “neither degrading nor malicious”, resulting in the token fine of one euro – but an accompanying order to pay Le Pen €3,000 in legal fees.
Zaibat was ordered to remove the photo within 48 hours or be fined €1,000 for every day it remains online.
Zaibat's lawyer Vincent Toledano said he would appeal the decision.
Le Pen was booted out of the National Front party by his daughter and party leader Marine Le Pen over his refusal to temper his xenophobic and anti-Semitic outbursts.
The younger Le Pen has worked hard to clean up the image of the far-right party, which drew a record number of votes in the December election but failed to win a single region.