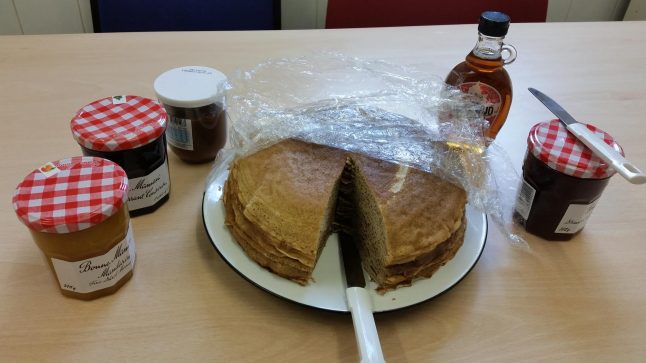 Photo: Imgur
Tuesday was Mardi Gras – or pancake Tuesday – and in an unknown office somewhere in the world, a French person made crepes for their team.
The whopping pile of the delicious French delicacy was then sliced into IT AS IF IT WAS A VICTORIA SPONGE CAKE.
The image was shared on photo sharing site Imgur, and then took off on social media site Reddit, garnering almost a million views in a day.
It was captioned: “A French colleague made crepes today. English people are barbarians…”
The original poster chimed in later to say that the office also has two Irish workers, one Russian and one Mexican, adding that the culprit “could have been anyone”.
But it was too late. The French media had noticed by then, and didn't hesitate to get into a little bit of Anglo-bashing. Liberation newspaper screamed that it was “a massacre” and a “declaration of war” (above) and that the French rugby team must avenge the disgraceful cultural faux pas by beating Les Rosbifs in the Six Nations Tournament.
Buzzfeed France appeared to be so appalled by the act that it issued a “shocking image” warning, meaning readers had to click to reveal the blurred image.
But seriously les gars, is it really such a problem cutting through a pile of crepes? What's wrong with having your cake and eating it too? As they say, there's more than one way to skin a chat. Just put the Nutella on the top.
Having said that, if we ever catch a French person putting Nutella on their fish and chips then there really would be a declaration of war…