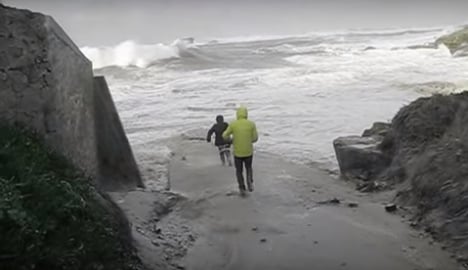 Storms have been pummelling France since Sunday, with weather agencies urging people to stay away from the coast due to a dangerous combination of huge waves and high tides.

But not everyone has listened, as you can see in the video below. Luckily, the three people in the clip escaped with their lives, but they were extremely lucky.

The video begins with a man down by the waterside as waves lash the beach at Porsguen in Brittany's Portsall .

As he turns his back on the sea, an elderly man and woman walks past him and gets caught by a large approaching wave. He loses his balance and is swept to sea.

His wife, who is also a retiree, runs screaming after him to help but is also swept out by the waves.

The younger man, a Parisian named Eric, runs out to help them when it appears the waves have calmed, but he is also swept up as another wave comes in.

Many took to social media to question why the person filming the drama didn't put down the camera and help. Later reports said the camera operator was in a wheelchair – which may explain why he wasn't able to physically help.

While the video ends after just a few minutes, the drama went on for several minutes more.

The young Parisian was able to pull the elderly man to safety, but his wife was swept back into the sea.

“She was thrown by the waves around for around ten minutes,” another bystander who came to the rescue told Le Figaro. “She was taken out about 50 metres from the shore, but was then brought back in.

“I went into the water two or three times. I had her in my arms but she escaped. The waves were too powerful.

“I was finally able to get her when a huge wave pushed us onto the sand dune. Three or four people helped drag her up to safety.”

The elderly pair and the young Parisian rescuer were taken to hospital, reported Le Telegramme newspaper.