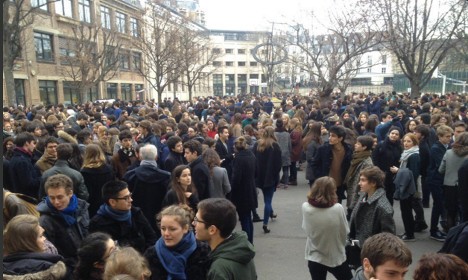 The man, described as a “young hacker” in the French press was tracked down through his Internet IP address to his home in Dijon, eastern France.

He has been transferred to Paris while investigators try to establish the extent of his involvement.

Police and investigation sources said computer equipment that the suspect had used were taken away for examination.

Between January 26th and February 1st, some of Paris' most prestigious high schools, and schools in several regions of England, received pre-recorded telephoned calls, telling staff to evacuate pupils because bombs had been planted.

Police found no evidence of any explosive device in any of the cases.

“The probe is trying to establish if there is a link between calls targeting high schools in Paris and threats against schools in other parts of the country, mainly in Lyon. We can't rule anything out,” a judiciary source said.

On Monday, two schools in eastern France were evacuated after hoax bomb threats.

France is in a state of emergency that was declared in the wake of the series of jihadist shootings and bombings that killed 130 people in Paris on November 13th.