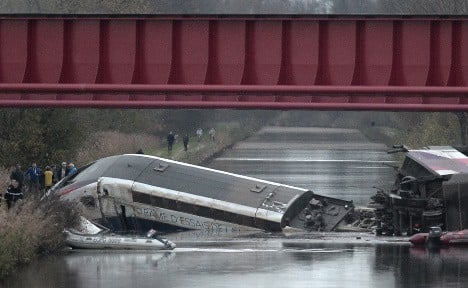 Photo: AFP
The train was on a test run back in mid-November last year when it flew off the rails at a bridge, crashing into the canal below.
Eleven people died and 42 were left injured. Environment minister Segolene Royal visited the scene the following day and described the scene as “apocalyptic”.
On Monday, preliminary investigation results confirmed that speed was the “sole cause” of the accident.
“The massively excessive speed of the train was the sole cause of its derailment,” reported the French Land Transport Accident Investigation Bureau (BEA-TT). The government bureau found that the train was travelling at 265 km/h while approaching a curve where the recommended speed is 176 km/h.
Some 200 metres further along the tracks the train was travelling at 243 km/h when it careered off the tracks and into a canal in Eckwersheim, near the northeastern city of Strasbourg.
Investigators said that it still remains unclear exactly why the driver didn't brake “up to 12 seconds” earlier, but added that there were “multiple factors” potentially at play. The team on board, consisting of 49 technicians and rail employees, as well as four children, were testing a high-speed line for the next generation of TGV due to go into service in 2016, a source close to the inquiry told AFP at the time.
The crash marked the first fatal accident since the TGV (“train grande vitesse” or high-speed train) went into service in France in 1981.
The investigation is being carried out by the French Land Transport Accident Investigation Bureau (BEA-TT), an agency of the French government charged to look into accidents involving all forms of land transport.