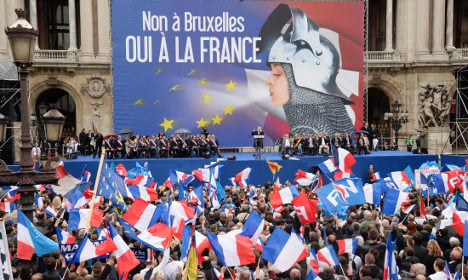 Supporters of France's far-right National Front (FN) wave French flags during a May Day rally in Paris on May 1st, 2014. Photo: AFP
The latest issue of Dar al Islam comes with a picture of a National Front march, together with the text: “The prime targets”.
“The question isn't whether France will get attacked again, it's how they will be attacked and when,” the magazine said, according to the Metro newspaper.
The story was picked up and spread on social media by Islamist expert Romain Caillet (see below).

“For the first time, National Front demonstrations are presented as targets in an official document from Isis,” he wrote.
On Monday, the FN Vice President Louis Aliot asked the Interior Ministry for protection.
“We ask the ministry to take the threat seriously to avoid the worst,” he said during an interview with RFI.
The threats prompted a strong reaction from other party members, including its deputy secretary general Nicolas Bay. He sent the story via Twitter to Prime Minister Manuel Valls, asking if he was “satisfied”.
The move may be in reference to the fact that Valls has recently called the party out for being racist and anti-Semitic, noted Europe 1.
Another possibility, according to terror expert Caillet, is that Isis members were “annoyed and then provoked” by an “irresponsible slogan” coined by socialist MPs who said “a vote for the National Front is a vote for Isis” in the run-up to the regional elections.
The MPs suggested that the National Front is dividing the citizens of France, which is the same goal of Isis.
The party has landed in hot water in its attempts to distance itself from Isis in the past. In December, party President Marine Le Pen saw a furious backlash after she tweeted a graphic propaganda image of an Isis beheading in response to a TV journalist who likened her National Front party to the jihadist group.
SEE ALSO: How France is giving Isis exactly what it wants

The Dar al Islam magazine took aim at French schools in December, urging Muslim parents to pull their children out of French schools, and to kill teachers who share the French principle of secularism.
Teaching secular values was further emphasized in schools after the attacks on Charlie Hebdo and Hyper Cacher supermarket as a strategy to better promote tolerance and respect for freedom of speech.