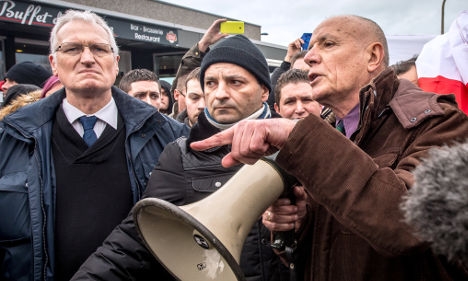 General Christian Piquemal, with the megaphone, right. Photo: AFP
The rally saw around 150 protesters gather in central Calais carrying signs such as “This is our home,” waving the French flag and singing the French national anthem.
Among them was 75-year-old Piquemal, who was leading the march, and who was one of the dozen or so arrested.
He was due to go on trial on Monday, but it had to be postponed after he fell ill and ended up in hospital.
The former general was charged with “taking part in a gathering which did not disperse after warning”.
Piquemal had reportedly told protesters that he wanted “to prevent the decline of my country”. Five of those taken into custody risk potential jail sentences of up to one year. Some of the others were accused of having banned weapons, including a knuckle duster and a taser gun.
Many in France were outraged by the arrest of the high profile Piquemal, who had previously served under three Socialist prime ministers as the deputy head of the military office.
Politicians from the far-right and anti-immigrant National Front party shared their support for the former general, with Marion Le Pen tweeting: “Support General Piquemal: unfairly and brutally arrested at Calais”.

Stephane Ravier, a National Front senator in Marseille, tweeted that the arrest was “an insult to the power of French heroism”.
Saturday's march was organized by anti-Islamic group Pegida, which began as a movement in Germany in mid-2014 and has since spread to France and other European countries, albeit in far less numbers.
Calais, where the march was held, has become a hotspot of Europe's refugee crisis.
Around 3,700 migrants are living in a camp on the outskirts of the city, nicknamed the “Jungle”, hoping to smuggle themselves across the Channel to Britain on lorries or trains.