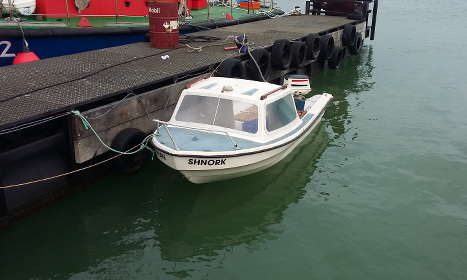 A boat that was used by four migrants in their failed attempt to cross the English Channel between France and the UK. Photo: Bernard Barron/AFP

Rescuers were only alerted after one of the migrants made it back to the beach at Sangatte in northern France before dawn.

He was in a dangerously cold state and asking for help for his four compatriots.

A search was launched and the boat with the four men was located with the help of a Belgian army helicopter, the French coastguard said.

“Around 5:30 am (0430 GMT), a migrant on the beach at Sangatte in a hypothermic condition requested help and indicated that he had been on a boat with four other people,” local authorities in the Pas-de-Calais region of northern France told AFP.

The man told rescuers that he and the four others had been trying to make it to Britain.

“They were really in extremis, we saved their lives, because they were on the point of capsizing. There were terrible waves and the boat had filled with water,” said Bernard Barron, one of the rescuers.

Gilles Debove, of the local police union, said it was “extremely unusual” for migrants to try to reach Britain by the sea route.

“This must be the second or third time in recent years,” he said. “Crossing is very dangerous because it's a maritime highway. The Channel and the North Sea, it's not the Mediterranean.”

The president of a local organization supporting migrants, Christian Salome, told AFP he feared a rise in the number of attempted Channel crossings due to tighter security around the port of Calais making it more difficult for migrants to smuggle themselves across in lorries.

Around 3,700 migrants, mostly from Africa, the Middle East and Afghanistan live in the so-called “Jungle” shanty camp at Calais from where they hope to make the journey to Britain.

A further 1,500 live in a camp at Grande-Synthe near Dunkirk.