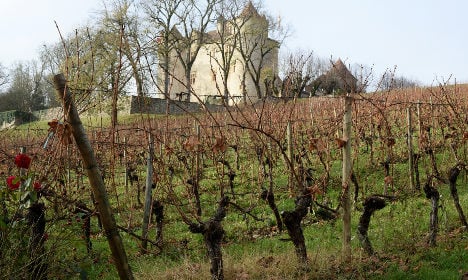 Cahors is the new go-to destination for foreign investors as wine-growing land is becoming scarce – and therefore exorbitantly expensive – in other French regions.

“You can't afford anything in Bordeaux or the Rhone or even in the Loire anymore,” says Chilean specialist Pedro Parra, who works for Argentine wine firm Altos Las Hormigas. “Cahors is all that's left.”

Besides, Cahors – whose dominant grape is the deep purple Malbec – is attractive as a wine “that we can't make in our country”, he said.

Also beating a path to the region are Chinese investors as the taste for French wines continues to grow exponentially in China.

“The Chinese are coming to see us soon to sign a partnership,” says Sebastien Sigaud of the Cahors domain Metairie Grande du Theron.

The famous limestone plateau around Cahors is known for its high calcium content, which brings the freshness and minerality that define the region's wine.

“We don't have that calcium back home” in Argentina, said Parra, trudging through a path between rows of vines and stooping to crumble some of the distinctive white rock between his fingers.

“Up there, I can see 2,000 crates at $100 each,” he said, pointing to the top of a steep slope where a stretch of woodland has just been cleared.

Under the deal, the Cahors vintners will produce the wine with advice from Altos Las Hormigas, which in turn will market the result.

“It's a win-win partnership,” says Jeremy Arnaud, head of marketing for a Cahors winegrowers federation, with the region standing to gain in international status while piggy-backing on the vast sales network developed by Argentine Malbec.

“The Argentinians have the potential to show our wine to a lot of people,” said one of the partners, Germain Croisille of the Chateau les Croisille.

The advent of the Argentines is in a sense a homecoming for Cahors, whose vintners introduced the Malbec grape to the New World in the 19th century after escaping the devastating phylloxera plague that devastated their vines.

This back-and-forth, dubbed the “Malbec tango”, today sees Argentine oenologist Leo Borsi producing wine in France while Cahors counterpart Pascal Piero owns an estate in Argentina, which has the most extensive Malbec acreage in the world.

With the Argentine palate in mind, Borsi has selected his plots to make a Cahors he says is “a little more exportable”, with 3,000 bottles destined for export to Buenos Aires.

Costing an average €11,000 per hectare (2.5 acres), land in the Cahors region “is three times less than in Argentina and three to four times less than a Cotes du Rhone village,” Arnaud says.

Borsi and Parra are not alone in targeting the area, with Herve Joyau, a Malbec pioneer in Argentina, taking on an estate in the nearby Lot region.

The surge in enthusiasm for the Cahors region is a cause of concern for some.

“We are handing them history, (wine) DNA on a plate,” warns Alain-Dominique Perrin, owner of the prestigious Chateau Lagrezette domain. “I do not quite see how that is to our advantage. “

Others are more optimistic.

“The Chinese are not predators,” insists Bertrand-Gabriel Vigouroux, Cahors' foremost wine merchant and the owner of Chateau Haute-Serre.

“A Chinese investor can become an ambassador for Cahors wines.”

In any case, Thomas Chardard, a vintner who is also president of the Lot chamber of commerce, asks: “How can we stop them?”