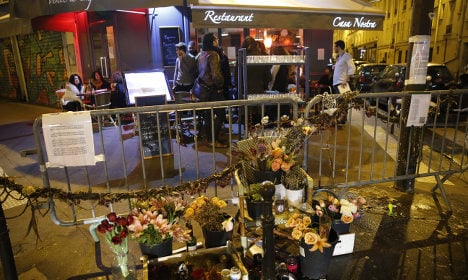 Flowers in tribute to the November 13th attack victims are displayed in front of the "Casa Nostra" restaurant. Photo: Patrick Kovarik

ISIS extremists who wrought havoc on the streets of the French capital on November 13th, eventually killing 130 people, raked the Casa Nostra pizzeria with gunfire. No-one was killed on the premises, though five people perished in the street outside.

Britain’s Daily Mail newspaper published dramatic CCTV footage from the Casa Nostra showing the horror of the assault, with one desperate woman’s life saved when either an attacker’s gun jammed or he had second thoughts.

But the publication of the footage stirred a row in France after media reports claiming the Mail had paid the restaurant 50,000 euros ($53,000) for it.

The A La Bonne Biere bar across the street from the Cosa Nostra was the first of the bars and restaurants to reopen, in early December, amid celebrations tinged with emotion.

But there was little fanfare as the pizzeria had its official relaunch on Friday – after reopening its doors two weeks ago – with only around 10 people showing up.

Owner Dimitri Mohamadi complained the restaurant was suffering a backlash because of the CCTV spat, with just eight customers on Thursday compared with 60 before the attacks.

“I had a restaurant that was doing really well. We were loved. Now even the regulars pass by without stopping,” he said, adding that the downturn had forced him to lay off four staff.

The backlash “has really hurt me. It has demoralized me, I’m on anti-depressants. I don’t enjoy life any more,” he said.

Other businesses hit by the attacks were paid 40,000 euros in compensation by the city authorities, but the money was withheld from the Casa Nostra.

“That pushed me down even more. Even the state thinks badly of me,” said Mohamadi.

His lawyer Jeffrey Schinazi said Le Petit Journal television news show, one of the outlets to make the claims about the sale of the footage, had been summonsed on a defamation suit.