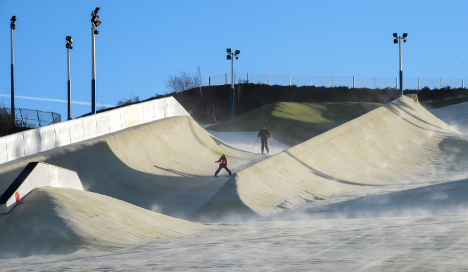 Photo: AFP
The big mound is in the flat, far north of France, a short ride from the Channel ports and the Belgian border in a former coal-producing region with dreary weather long shunned even by French tourists.
“It's really a unique sort of ski run in Europe. Only one other exists in Istanbul,” said Christophe Delos, director of Loisinord, as it's known, a mix of the French words for leisure activity and north.
Its three synthetic runways on the 10,000 square meter (100,000 square foot) slag heap were the continent's first of their kind when the site opened in 1996. They are kept slippery by misting machines, a system quite different from the bristly matting used on “dry slopes” that have since cropped up in many countries.
Loisinord's white slopes are “basically just a plastic carpet, a flexible structure which isn't abrasive,” said Delos. “You can fall at the top and slide down the 350 metres (1,150 feet) on your backside and nothing will happen by the time you get to the bottom.”
At 129 metres high, it is also France's lowest ski run, paling next to those in the majestic Alps that draw skiers worldwide.
But Noeux-les-Mines doesn't care. 'Social role'
“These slopes play a social role,” said Thierry Tassez, a local official in charge of territorial development in a densely populated region with high unemployment determined to make up for years of neglect.
“Our aim, of course, is not to compete with Val d'Isere but to allow young people and others who may lack means to have access to a pastime that would otherwise be out of reach,” he said, referring to a prime Alpine resort.
Today it draws more than 30,000 visitors a year, mainly locals but some from the Paris region — a quick two hours away by car — as well as Belgians, Dutch and Britons, who take the ferry or Eurostar to the nearby cities of Boulogne and Calais.
“An English federation even organised freestyle ski championships here for two years running,” said Delos.
Officially classified a  “mountain resort”, Loisinord is the pride of this town of 12,500. It has a beginners, an intermediate and an advanced slope with a full 21 moguls, or bumps. Over the years, it has added two drag lifts, three ski jumps, a half-pipe for snowboarders and courses with nationally accredited ski instructors.
The big difference is the price — five to eight euros an hour (about $5 to 9) including equipment, a fraction of the cost in Alpine resorts.
“It's just like the mountains,” insists 10-year-old Alexandre, “except when I fall I'm not cold.”
“You feel like you're on fresh snow because you go down the slope a bit more slowly and need to accentuate your movements,” said director Delos. “And it's a good way to get yourself ready for the real snow.” 'Ski with the Shtis'
“You've got to watch out when you fall as it is a bit harder,” said a woman who gave her name as Virginie.
While the resort is open year-round, it is busiest in the winter “because that's when people think about skiing”, said Delos.
And while it is not a “financial black hole”, it's “not exactly profitable either”, said Tassez.
“You have to see it more as a public service” and “a tourist draw”, he said. It's part of the “challenge of restructuring” after the last coal pits closed in 1968 and left this onetime cradle of Europe's Industrial Revolution in dismal shape.
Ironically, it's the coal-mining past that inspired Loisinord thanks to a custom of sliding down the slag heaps on “bouilleuses” — the round tops on old-fashioned washing machines.
In a “eureka” moment, a former mayor said why not turn the slag heap into a ski run and “let people ski year-round with the Shtis”, said Tassez, using the nickname for local residents.
“At least for once, our northern weather isn't against us,” he joked. “If it snows, we'll just have more place to ski.”