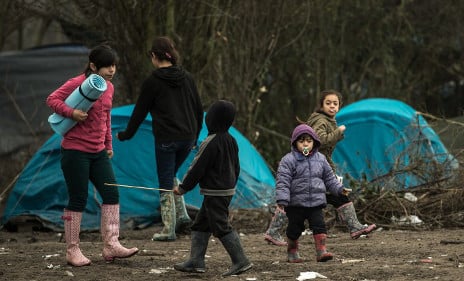 Children in the Jungle camp in Calais. Photo: AFP

UNHCR spokesman William Spindler said the agency was deeply worried, especially for children who were living there alone or had become separated from their families.

Conditions in the camps are “appalling” and “very unsanitary,” Spindler said.

“Children are very vulnerable to any exploitation. We know that people smugglers are present in these sites,” he said.

Nearly 4,000 migrants live in a makeshift camp dubbed “The Jungle” on the outskirts of Calais, hoping to smuggle themselves across to Britain on trains or lorries.

Almost 2,000 others live in a second squalid camp, the Grande-Synthe, about 40 kilometres (25 miles) away.

The French authorities are providing lodging for particularly vulnerable migrants and setting up containers in “The Jungle” able to house 1,500 people.

Shelters are also being built, to international standards, at the Grande-Synthe site.

The UNHCR said it “would welcome” the creation of additional reception places for children, and called on authorities to urgently look at ways of beefing up protection, “particularly for those children with relatives in another EU state.”