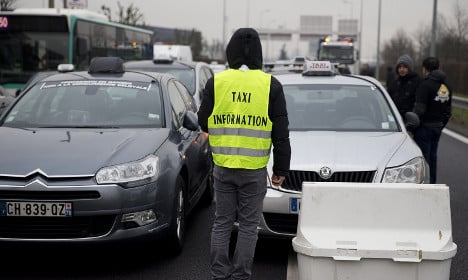 Travellers to Charles de Gaulle were advised to take the RER B on Friday morning (see tweet below), which is back running normally after Thursday's train strike, rather than risk trying to get to the airport by road.

Around 20 mini-cab drivers, known in French as VTCs (Vehicle de Tourisme avec Chauffeur) blocked the usual access to the airport from Paris with their cars.

VTC drivers stopped taxis heading the airport's Terminal 2 on Friday morning and forced passengers to get out with their suitcases and finish the journey on foot, according to a report by BFM TV.
The channel reported a large police presence at the scene.
An alternative route was put in place, but there were reports of long delays on the road to the airport from Paris.

The protest was eventually called off around 9am but the mini-cab drivers moved off to Nation in the east of the city to continue their protest.

There were also reports of taxis drivers staging their own rival protest at Charles de Gaulle, with fears that the two groups may confront each other.

Tensions between  taxi drivers and mini-cab drivers remain high with police having to intervene at Porte Maillot in the west of Paris on Thursday night when drivers confronted each other.

There were also protests held at Place de la Republique on Thursday night, see tweet below.

Private minicab drivers quite literally causing a headache as they protest at Republique. LOUD. pic.twitter.com/kqQmcAhtGx

The action was organised by the Alternative Mobilité Transport association, which unites around 10 mini-cab and private car hire firms. Uber drivers have backed their protest.

The protest is a continuation of a movement that began Wednesday as drivers of firms like Uber protest against government measures that they believe unfairly favour ordinary taxis.

Those measures were promised in a bid to appease taxi drivers after they staged their own nationwide protest at the end of last month. Taxi drivers were angry that the government was failing to enforce laws that imposed regulations on firms like Uber such as a ban on them picking clients up at airports unless they had a booking.

After unions met with the prime minister, the government promised “incessant checks” to make sure VTC drivers were not breaking the rules.