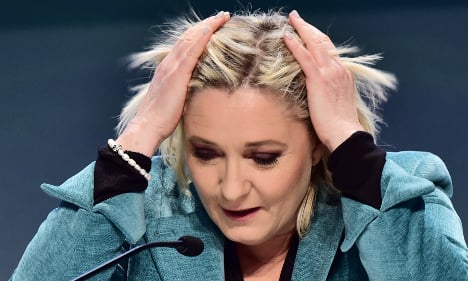 Marine Le Pen. Photo: AFP
The jury for Friday's prize was made up of a series of journalists and presided over by political scientist Thomas Guénolé, reported France Info.
Le Pen, the president of the anti-Europe and anti-immigration National Front, appeared to have tripped up most when it came to immigrant statistics.
The jury particularly pointed out several of these incidents, including when she increased the daily number of refugees crossing the Mediterranean by tenfold in an interview with iTV.
Another notable time she was rumbled was after she tweeted out that firefighters in Calais had been attacked by migrants, which was later refuted by the fire department itself.
She was also called out for exaggerating statistics on the gender of migrants, after she initially said they were 99 percent male, before later reducing it to 75 percent. The figure at the time was closer to 69 percent.
The jury pointed out a series of other candidates, including everyone from President Francois Hollande to Interior Minister Bernard Cazeneuve.
The latter was given the “Robocop” award for saying the Saint-Denis counter-terror raid in November was carried out under a “deluge of fire” from terrorists, though officials revealed later that only two handguns were found in the building.
The prize is intended to keep politicians in check when it comes to getting their information right, and to encourage the public to keep an eye on political discourse.
It's the second year the prize has been awarded, with opposition leader Nicolas Sarkozy taking home the dubious honour last year.