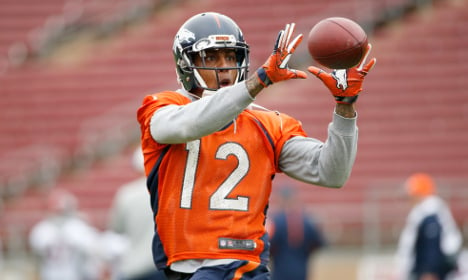 Andre Caldwell #12 of the Denver Broncos catches the ball during the Broncos practice for Super Bowl 50. Photo: AFP
The biggest occasion in the American sporting calendar takes place just outside San Francisco on Sunday, with an estimated one million visitors due to visit the region for the game and festivities linked to the extravaganza.
“At this time we know of no specific credible threat directed at Super Bowl 50 or related events,” Johnson told a press conference.
Johnson said he had been in “constant” contact with French officials following the bloody November 13th attacks in Paris, which left 130 people dead and were claimed by the Islamic State group.
The Paris attacks included a suicide bombing at the Stade de France stadium where France played Germany in a friendly soccer match.
Asked if security planning for Super Bowl 50 differed from arrangements for previous years in light of events in Paris, and the recent California mass shooting in San Bernardino, Johnson replied: “I would say every year is different. The world situation, the threat picture, is different every February.”
“We are focused on layered security, seen and unseen. We learn from events of the past but we have to protect against events of the future,” he added.
“We try to anticipate things that could happen from multiple different directions. We're always informed by recent events and what we see and the world situation.”
Asked if US authorities were in contact with French officials, Johnson added: “Yes, constantly, including myself, with my French counterpart the Minister of Interior. Our intelligence and analysis directorate, me, the deputy secretary and numerous others have consulted the French, and we continue to do so.”
Johnson meanwhile called for public vigilance to help thwart against so-called “lone wolf” attackers.
“'If you see something, say something' is really more than a slogan,” he said.
“The public has a vital role in our law enforcement and homeland security efforts, particularly when you're dealing with the prospect of lone actors.
“It is almost always the case that when someone self-radicalizes or turns to violence on their own, there is somebody close to them who saw the signs. The public has a role in public safety.”