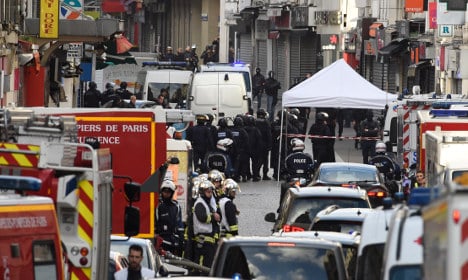 It was "Sonia" who told police the Paris attacks ringleader was alive and well and planning more bloodshed. Photo: AFP

In an interview with French radio RMC, the woman, who is now in hiding and fearing for her life, described how she met Abdelhamid Abaaoud, the presumed organizer of the November attacks, and how she alerted police to the fact he was alive, in Paris and planning more carnage.

The woman, whose name was changed to Sonia for the sake of the interview, was a friend of Abaaoud’s cousin Hasna Ait Boulahcen, who on the Sunday after the November 13th attacks received a call from a Belgian number with instructions to go and pick someone up in an industrial estate in the suburb of Aubervilliers.

Sonia accompanied Boulahcen, who when arriving at the meeting point was instructed to shout the code “1010”. Abaaoud immediately appeared – to the shock of the two women, who like France’s intelligence services believed that he was still in Syria.

“He had a woolly hat on, orange trainers, a bomber jacket. He was smiling. He looked nothing like a terrorist,” said Sonia.

Sonia immediately learned that Abaaoud was involved in the devastating terrorist attacks of two nights before. “The terraces, that was me,” Abaaoud told her proudly, referring to the gun attacks on the terraces of bars and bistros across the capital.

The woman told RMC radio that she confronted Abaaoud, accusing him of killing innocent people.

“He told me they were not innocent. He said ‘look what’s happening in our country, in Syria.’”

“He talked about the attacks just like he was talking about going shopping. He was happy,” she said.

One detail which will cause major concern to French authorities is that Abaaoud told of how the jihadists had managed to enter France without any official documents.

According to Sonia, Abaaoud said around 90 of them had returned from Syria and they were spread out around the Paris region: Syrians, Iraqis, British, French and Germans.

But then Abaaoud revealed more chilling information; that he was planning more immediate attacks to make up for ones that didn't succeed on the Friday.

“Certain attacks failed and I am here to make sure there are no more failings,” were his words.

After being driven to a hide out in the suburb of Saint Denis, he asked his cousin to get hold of two suits and two pairs of shoes.

'Abaaoud planned to hit a nursery'

He told his cousin that he and his accomplice Chakib Ahrouh, planned to hit a commercial centre, a police station and a nursery in the business district of La Defense, to the west of Paris.

“She told me they were going to do it on Thursday and I said to myself 'I have to stop them',” she said.

Sonia dialled the emergency number, 197, which had been set up by the Ministry of Interior in the aftermath of the attacks and told authorities that Abaaoud was alive and hiding out in an apartment in Saint-Denis. (A suspect is taken away in the raid at Saint Denis. Photo: AFP)

On the Wednesday morning, police commando units moved in and Abaaoud and Hasna Ait Boulahcen were killed in a firefight. Abaaoud’s accomplice blew himself up, before they were able to strike La Defense.

Since then, Sonia says she feels abandoned by the country she risked her life in helping

She was told she would have to change her name, move home, quit her job and not see her family or friends. She lived from hotel to hotel in the days after the attacks until a new lodging was found

“We can't even say that life has changed, because I have no life,” she said adding that she lives in constant fear of reprisals.

Sonia says she is still waiting for a new identity card and social security number. After being put under pressure, France’s Ministry of Interior granted her financial aid, but what she really wants is to feel safe and benefit from psychological support to help her adjust to a new life.

“If there weren’t people like me, the police wouldn’t be able to do anything. The proof is that Abaaoud was here and they didn’t know,” she said.

“Even if I live in danger, really, I’d rather it this way than have the death of innocent people on my conscience,” said the woman.

Sonia's lawyer Patrick Baudouin, a human rights specialist, told The Local on Thursday that his client was being failed by French authorities.

“She enabled police to get their hands on Abaaoud and that means she is danger from other jihadists. She doesn't even have a new identity yet. Her details are easily accessible in her file,” Baudouin said.

“The state has not taken all the adequate measures to help this woman who is in real psychological distress. We need to protect her and help her regain some kind of normal life.”