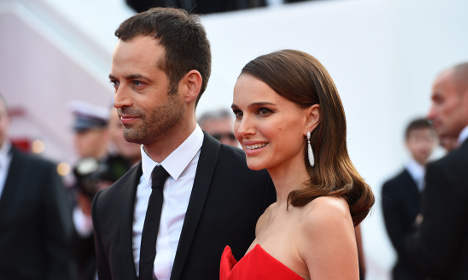 Benjamin Millepied and his wife Natalie Portman. Photo: AFP
The former dancer — who is married to Hollywood actress Natalie Portman — had faced stiff resistence to his plans to radically reform the institution, a bastion of classical ballet tradition.
“I have decided to end my time as director of dance,” he said in a statement, adding that he wanted to “concentrate 100 percent on creating” rather than on administration.
His fairytale return to France in 2014 came after a string of international successes after he founded the acclaimed LA Dance Project and married Portman, whom he met on the set of “Black Swan”.
She later won a best actress Oscar for her portrayal of a tortured ballerina in the film.
The dancer turned choreographer, who made his name at the New York City Ballet, did not hide his unhappiness with the way the Paris ballet was run in a behind-the-scenes documentary aired on the Canal+ channel just before Christmas.
He claimed that the ballet was hidebound, too hierarchical and obsessed with internal competition.
Nor was it as “excellent” as it claimed to be, he said, and performances sometimes looked like “wallpaper… and were deadly boring”.
“Is this no fun?” he cried at one point, appealing to his dancers to “let themselves go” in the classical ballet as they did in contemporary dance pieces.
For all the ballet's faults, he said its troupe could be “perhaps the best modern dance group in the world”.
Israel-born Portman moved to Paris to be with her husband and their four-year-old son, Aleph. Her first film as a director, “A Tale of Love and Darkness” debuted at last year's Cannes film festival.
But she has been reported keen to relaunch her career in Hollywood and has signed up to play Jackie Kennedy in a biopic of the late US first lady.
Url copied to clipboard!