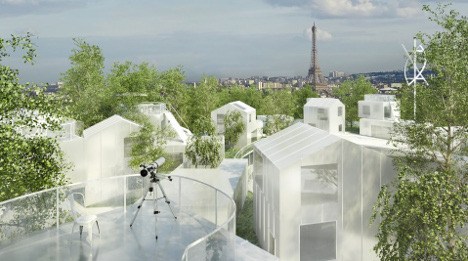 One of the winning designs. Photo: Reinventer.Paris
The mayor, along with urban planning officials, had earmarked 22 sites around the capital which officials believed could do with a major modern makeover.

The project, entitled Reinvent Paris, challenged architects to revamp certain sites in the capital in order to “make the city even more attractive, accessible and environmentally friendly”. Mayor Anne Hidalgo launched the plan in 2015.

The following images are some of the best projects that have been selected by the Town Hall from 360 entries. A final decision will be made in December, when the winners will be invited to buy or rent the sites so they can implement their grand designs. Here are the finalists, which were announced on Wednesday. Designed by Xtu Architects, this project would fill an empty lot in the Masséna district – the last lot in the neighbourhood to be urbanized. DGT Architects are behind this plan to transform Gare Masséna, a train station in the 13th arrondissement. The land, which is currently not being used, would be turned into a public space dedicated to nutrition. An empty plot of land in the 13th arrondissement would be transformed into a green but urban space with this proposal for a housing project with a communal rooftop garden. 'A thousand trees' is the name of this ambitious project on Boulevard Pershing in 17th, which would see offices with panoramic views replace the bus station which currently stands there. Planned for the same site as the above project, this design will provide housing, office blocks and shops in a structure which will act as a bridge between the city and suburbs. In the 18th arrondissement, this project would contain a creche and housing, with a greenhouse and roof garden. Three Parisian architecture firms came together to design this bridge-building overlooking the ring road in Porte Maillot, an up-and-coming area which will see numerous infrastructure and development projects over the next few years. This design from a group of architecture companies would house a funeral home and a city logistics platform in the 13th arrondissement, located on a currently disused road. L35 Architeos have designed this wooden structure at ground level, which would house local businesses in what is currently an unused plot of land on Avenue d’Italie in the 13th arrondissement.

All pictures courtesy of Reinventer.Paris