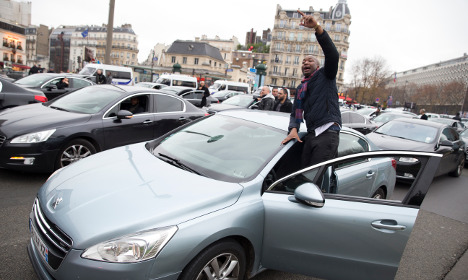 Minicab drivers will stage "silent" protests on Wednesday. Photo: AFP
Taxi drivers went on strike last week, citing unfair competition from private cab companies like Uber and a lack of will by the government to enforce laws to protect them.
After long discussions with Prime Minister Manual Valls, the taxi drivers emerged happy enough to call off the strike, with Valls promising to tighten controls on private cab drivers, and crack down on allegations of licence violations across France.
But the story is far from over. Drivers of private minicabs (known as VTCs in France) have announced that they will be protesting on Wednesday, starting at the Montparnasse train station in Paris at 11am, followed by a procession to the Esplanade des Invalides.
And the protest will be silent because the drivers “are in mourning”, according to Joseph François, the protest organizer who heads the Alternative Mobilité Transport (AMT) association, a group that speaks for around 1,000 minicab drivers.
The drivers are “mourning” over what they consider to be a lack of a future, fuelled by what they consider to be the government bowing down to the taxi drivers last week to appease them, and in the process getting tougher on minicab drivers.
Francois added that he wanted “a real debate” over how to repay taxi drivers the cost of their licence, which can can be sold off by retiring drivers to youngsters for up to €240,000.
Ride-booking service Uber has supported the protest, alerting its drivers and encouraging them to participate.
However other mini cab groups, such as Unsa SCP-VTC, have pointed the finger at Uber as the reason they will not be taking part.
“We've fallen into a trap,” the group said in a statement.
“Many drivers got into debt after buying a car on credit, thinking that being a driver would be profitable and legal.”
The group questioned how drivers could be expected to “build a future” when Uber can deactivate their accounts at any moment and reduce tariffs without warning or discussion.