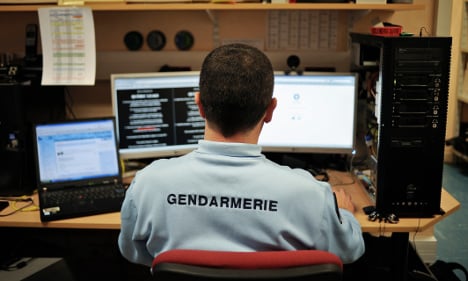 French police shut down almost 5,000 websites connected to radicalism. Photo: AFP
There were 8,250 people who were reported on suspicions of being an Islamist radical in France last year – twice as many as the year before, according to fresh statistics.
The figures come from an official report that was leaked to Le Figaro newspaper and was published on Tuesday.
The report found that the number of people suspected to have become radicalized had doubled from 4,015 in 2014 to 8,250 last year.
Hundreds of radicalized individuals, including women and teenagers, have left France in recent years to fight jihad in the Middle East.
Around 70 percent of the suspected Islamist radicals were male and 80 percent of the cases were deemed to be “serious”. The paper added that there was also a hike in the number of women and youths being radicalized.
The figures are based on people identified by police, as well as reports made to a specialist anti-radicalization hotline, which members of the public have been encouraged to use to let authorities know about vulnerable or potentially dangerous individuals.
The map below shows that Paris and its outer suburbs were the hotspots for radicalization, which is perhaps unsurprising as these are the most populated départements in the country. But they are also areas with high deprivation and large numbers of immigrant families.
However, there were also worrying areas in the far north and south, each seeing over 200 people turning to extremist Islam (highlighted in dark blue).

The report noted that a total of 4,848 websites were blocked in France for their connections to radical Islam, which included Twitter and Facebook accounts.
A source in a counter-terror unit told Le Figaro, however, that 95 percent of reports were made as a result of the individual having “human contact” with someone rather than being identified through online activity.
The report also noted that there were 275 instances where suspected radicals were prevented from leaving France.
With France still hurting after two terrorist attacks in 2015, authorities are under pressure to prevent more young people becoming radicalized.
A report in December last year by the Ministry of Education revealed that officials had identified 850 “radicalized” students.
A ministry spokesperson said that teachers have been urged to keep an eye out for several factors that may suggest a student is becoming radicalized.
These include changes in dressing habits, behaviour towards women, “systematic protests” towards subjects like history and life sciences, as well as any hint of a sudden interest in religion.
Last month saw the introduction of “de-radicalization” prison wings, which essentially see radicals isolated and rehabilitated.
After the January 2015 attacks in Paris, which left 17 dead, France began to roll out a €425 million plan to combat terrorism, which included cyber patrols, increased monitoring of suspects, and a “Stop Jihadism” shock campaign.
Another government campaign, released in October, saw a group of French parents speaking out about their suffering and constant anguish after their sons and daughters left home to fight jihad after converting to Islam.