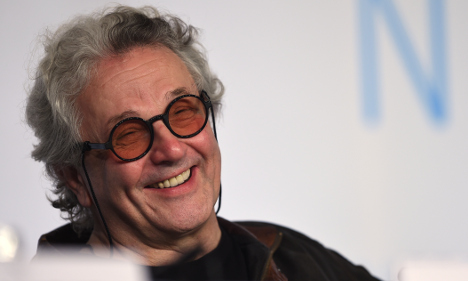 "Mad Max" creator George Miller. Photo: AFP
The 70-year-old director of “The Witches of Eastwick”, who launched the career of Hollywood star Mel Gibson and a whole genre of “outback gothic” films with the “Mad Max” series in 1979, reacted to the news in typically flamboyant fashion.
“What an unmitigated delight!” he said. “Such an honour. I'll be there with bells on!”
Choosing the unapologetically populist Miller, who also wrote and directed “Babe”, the world's first blockbuster about a talking pig, may ruffle the sensibilities of Cannes' arthouse diehards.
He returned to the animal kingdom with the animated 2006 hit about tap dancing penguins, “Happy Feet”.
But the organizers were at pains to point to his credentials as a cinematic pioneer.
“Throughout his career, George Miller has constantly experimented with a variety of genres, brilliantly reconciling mass audience expectations and the highest artistic standards,” they said in a statement.
“Mad Max” broke the mould, they argued, “an ultra-violent futuristic film that brought the action film genre a touch of class with its masterly combination of road movie, Western and science fiction elements.”
The fourth in the series, “Mad Max: Fury Road”, opened last year's Cannes festival and is in the running for no less than ten Oscars later this month.
It scooped nine prizes at last week's Critics' Choice Awards in Los Angeles, including best director.
Miller's heart-breaking drama “Lorenzo's Oil”, starring Susan Sarandon and Nick Nolte, was nominated for two Oscars in 1992.
But “Happy Feet” won the director the best animated feature award in 2006.
Miller was one of a quartet of talented and commercially successful Australian film-makers to have emerged in the 1980s, led by Peter Weir (“Picnic At Hanging Rock”, “The Truman Show”), Bruce Beresford (“Driving Miss Daisy”) and Phillip Noyce (“Patriot Games”).
The 69th Cannes festival will run from  May 11th to 22nd. Miller's jury, who will decide who gets its top prize, the Palme d'Or, will be announced later.