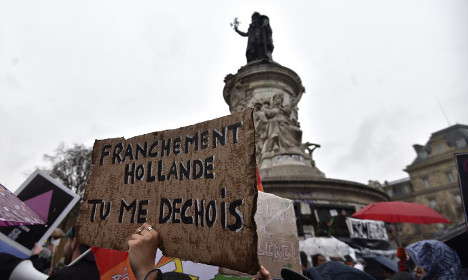 A protester uses a play on words to tell Hollande he is disapointing them. Photo: AFP

Since being elected Hollande has hardly enjoyed the backing of the French public.

They lost trust in his ability to solve record unemployment and a floundering economy a long time ago, but when it came to terror and “war”, Hollande seemed to have the confidence of the people.

Amid the shock and the grief of two terror attacks, Hollande for once gave the impression of being in control of the country as he vowed not to give in to terror and insisted France’s principles of liberté and laicité would win through.

But it appears his convincing impersonation of a wartime leader has worn off with a poll this week showing that six out of ten respondents do not trust him to lead the fight on terror, a rise since a similar poll was taken last in November. While the change in feeling was not explained it could be that public have grown tired of Hollande's unhelpful talk of being at “war” that sparked memories of George Bush's post 9/11 rhetoric.

Or it may be linked to Hollande's new found love for right and even far right policies.

The move to strip dual nationals of French citizenship if they are convicted of terror offences – an idea seemingly lifted from the far right – has got him into a real pickle.

This policy, which will be discussed by parliament later this month appears ludicrous given that most experts – and even Hollande's own Prime Minister – agree it will do nothing to dissuade terrorists from attacking France.

Experts argue the text of law is unworkable and it may take years of costly court battles before someone is stripped of their citizenship and deported.

He has already lost popular minister Christiane Taubira because of the move, dismissed by many as nothing but symbolic.

“Let us dare say it: A country should be able to handle its own nationals. What would become of the world if every country deported birthright citizens considered undesirable? Should we imagine a landfill where they will all be put together?” Taubira wrote in a new book to be published on Tuesday. Possibly worse than the notion of France “not being to handle its own citizens” is that the move risks making matters worse.

Many of those three to five million dual nationals, who may understandably feel stigmatized by the policy, will be second and third generation Muslim immigrants from North African countries.

These are the type of young people who are already disaffected, living in the poor suburbs on the edge of French cities and are particularly vulnerable to falling into the hearts and minds of Isis.

“These people will feel stigmatized, left aside from everyone else and considered different,” Patrick Baudouin, honorary president of the International Federation of Human Rights (FIDH) told The Local.

“They will look at France and its principles of liberté, égalité and fraternité and think those are just words because in reality they don't exist.”

That of course, is exactly what Isis chiefs would want.

SEE ALSO: Liberté losing out in France's 'war' on terror

Patrick Weil, an author and expert on citizenship and identity, is one of those who have ridiculed the French government for the stripping of citizenships plan.

He is one of many who believe the focus and energy of Hollande and his government should be better spent on finding ways that would really reduce the terror threat facing France.

“Hollande should instead be thinking about how to unite the country,” Weil said at a meeting of the Anglo American Press Association, as as well as suggesting that reforms of the police and security services would have a more positive impact on battling terrorism.

Weil says France also need a change of mentality towards its religious minorities.

More and more voices are also speaking up against Hollande's plan to extend the state of emergency until May, which the French parliament will also vote on later this month.

While the emergency powers have allowed the government to carry out thousands of house raids and place scores of people under house arrest, only a handful of terrorism investigations have been launched as a result and only one man has been put on trial.

France says it has foiled a number of terror attacks in recent months, not as a result of the emergency powers, but classic counter-terrorism surveillance and intelligence operations. Many in the Muslim community feel their members are being unfairly targeted with reports of night time raids that yield nothing and just leave behind more resentment towards French authorities.

The Collective Against Islamophobia in France (CCIF) says it has received 228 complaints since the emergency laws went into effect, including 57 related to house arrests.

Another who has been critical of France’s response to the terror attacks is author and journalist Nicolas Henin, who was a one-time prisoner of Isis before being released.

“I have a suggestion for Manuel Valls. Let’s maintain the state of emergency until the next attack, just to show that it’s useless,” he tweeted.

Despite the public's apparent loss of faith Hollande knows however that his measures are still popular, with polls suggesting a majority of French are in favour of the move to strip citizenships from dual nationals as well as extending the state of emergency.

But it looks more and more like a case of Hollande taking action just to please a fearful public rather than them being pleased by how he is handling the situation.

Esther Benbassa, a Green party senator says Hollande's policies are now being dictated with the 2017 presidential election in mind.

“I call it cosmetic politics,” she told RFI radio

And it looks like the French are slowly seeing through it.