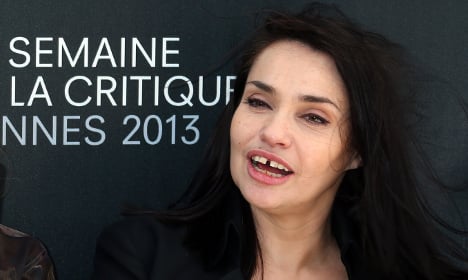 Béatrice Dalle. Photo: AFP
Dalle shared the anecdote with the host of France 3's programme Divan, while talking about her time working in a morgue.
“One time we made ourselves a meal, we wanted to eat because we had taken acid,” she said.
“We tasted it, it was an ear. Oh la la, it's no big deal. In any case the guy didn't complain, he didn't even know that I ate his ears,” she said before laughing.
The host, sitting slightly behind Divan, looks visibly disgusted.
The link in the Tweet below shows the clip from the programme.

Dalle also speaks of how she had sold body parts to medical students several times, but that they (the cadavers) “never complained”.
The programme is set to be aired on Tuesday.
Béatrice Dalle, 51, is best known for playing the title role in the 1986 cult film “Betty Blue”, a wildly passionate film that was nominated for an Oscar for Best Foreign Language Film.
She has been no stranger to the long arm of the law before, being arrested in the US for possessing cocaine and in France for assaulting a traffic warden.