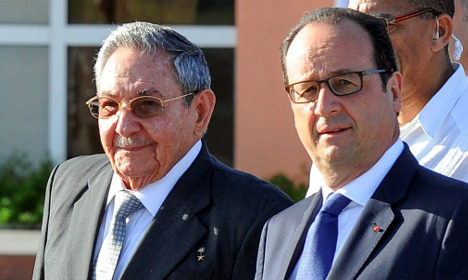 The Cuban leader arrived in Paris on Saturday, two days ahead of the start of the official programme, sources at Orly airport south of Paris said.

Castro's visit is an indication of his island's improved ties with major powers following last year's restoration of relations with longtime foe, the United States.

On the back of that rapprochement the 84-year-old leader is now paying court to France, one of his most powerful European allies.

French officials said when the visit was announced on January 19th that it would mark “a new stage in the strengthening of relations between the two countries” following on from President Francois Hollande's own state visit to Cuba last May, the first by a western head of state in more than half a centrury.

“This visit is important for Cuba's image,” said Eduardo Perera, an expert in international relations at Havana University, specializing in Europe.

“It will undeniably make Cuba shine on the international stage.”

Although Washington has yet to lift its half-century trade embargo on Cuba, US and European businesses are jockeying for a place in the market as the island's economy gradually opens up. Hollande urged an end to the blockade, which was imposed in 1962, on his Havana visit.

Trade delegations have been flocking to Cuba, hoping to cash in on its highly trained workforce and natural assets such as its sun-drenched Caribbean beaches, a draw for tourists.

During Castro's visit, France and Cuba are expected to sign an “economic roadmap” to improved ties, French officials said.

They will also sign deals on transport, tourism and fair trade.

Bilateral trade between France and Cuba is currently worth about $195 million.

That level is “not in line with our ambitions,” France's minister of state for foreign trade, Matthias Fekl, was quoted as saying in French newspaper L'Humanite.

Castros in the Elysee

Castro's Paris trip is his first state visit to Europe since he took over from his elder brother Fidel as leader in 2006. The latter visited France in 1995 and met then president Francois Mitterrand.

French officials said Hollande will officially receive his guest Monday under the Arc de Triomphe at the top of Champs Elysees avenue, which will be decked with Cuban flags.

Castro will then hold talks with Hollande at the Elysee presidential palace and attend a state dinner before Tuesday meeting various French officials.

France recently engineered an agreement among the Paris Club of international creditors to write off $8.5 billion of Cuba's debt.

Paris is also taking a leading role in strengthening Cuba's political ties with Europe as a whole.

Human rights remains a sensitive issue, with international authorities accusing the Castros of repressing and harassing their political opponents.

The government is sensitive about being lectured on the topic.

A diplomatic source in Paris said human rights “will be discussed” during the bilateral talks. Hollande is expected to take a discreet stance on the issue, however, after his meeting with Fidel Castro last year drew some criticism.

Hollande this week hosted Iran's President Hassan Rouhani, another head of state from a country whose leaders are accused of human rights abuses.

Hailing a “new relationship,” Hollande and Rouhani sealed a sheaf of large trade deals drawn up after nuclear sanctions on Iran were lifted.