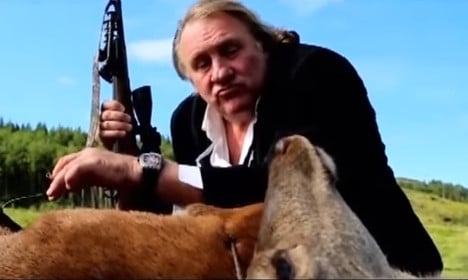 Photo: YouTube Screenshot
The actor stars in the commercial for high end Russian watchmaker Custos.
The clip, embedded below, sees the actor crouched over what seems to be a dead deer, with a hunting rifle in his hand.
“To 'smoke' a deer, you must always be on time,” he tells the camera. “Thanks to my Custos, I was on time.”
He then gestures towards the deer corpse and says “It was his time”, before blowing what appears to be a kiss in the direction of the animal.
The video ends with images of the brand's latest offerings, together with the words “Proud to be Russian”.
It's no surprise that the actor is promoting Russian products – he has become one of the country's favourite sons after he was given a Russian passport in early 2013 from President Vladimir Putin.
In 2012 the French tax exile famously quit France to become a tax resident of Belgium, a move that was judged as “pathetic” by the then French PM Jean-Marc Ayrault.
The actor has frequently spoken out in support of the Russian president and has angered Ukrainian leaders with some of his comments at the height of the ongoing conflict in the east of the country.
In July, Depardieu was added to a black list in Ukraine, which features the names of 600 people judged “a threat to national security”.
The actor is pretty much blacklisted in France too although he might not be quite judged a threat to national security just yet.
He has frequently tried to wind up the French government by claiming he “was proud to be Russian” and calling France a “sad” place led by an uninspired government where people are “fed up”.