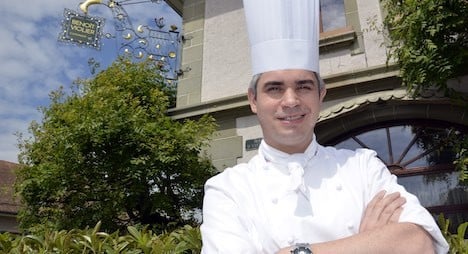 News of the 44-year-old's death, just months after his Restaurant de l'Hotel de Ville was crowned the “world's best restaurant” by an exclusive ranking, sparked a wave of sadness as contemporaries extolled the French-Swiss chef's talents.

“Late in the afternoon, police… went to Crissier where they discovered at his home the body of Mr Benoit Violier,” Swiss police said in a statement, adding that it appeared he had shot himself.

Crissier, near the southwestern Swiss city of Lausanne, is home to Violier's restaurant.

Police said an investigation had been opened into the death.

The statement added that Violier's family had asked for privacy “to be allowed to mourn in peace”.

The gastronomic guide is the French foreign ministry's answer to the Britain-based World's 50 Best Restaurants.

Celebrating the win, Violier said at the time: “It's wonderful, it's exceptional for us. This ranking will only motivate our team more.”

Violier took over the reins at the restaurant with his wife Brigitte in 2012, following the retirement of his mentor Philippe Rochat, another towering figure in French cuisine. Rochat died after falling ill while cycling last year.

Born in the French coastal city of La Rochelle into a family of winemakers, Violier's career went from strength to strength over the years, and he was named Chef of the Year in 2013 by the influential Gault & Millau guide, second only to the Michelin guide among gourmets.

Known as a keen hunter, game was a mainstay in Violier's signature dishes and he was known for using local, seasonal products.

He obtained Swiss nationality two years ago, according to Swiss daily Blick.

Michelin-starred French chef Pierre Gagnaire was one of many of Violier's peers who expressed their shock at his death late Sunday.

“My thoughts go out to Benoit Violier's family. Very sad news about an extremely talented chef,” he wrote on Twitter.

Paul Bocuse — dubbed the “pope” of French cuisine — described Violier on Twitter as a “great chef, great man, huge talent” while fellow star chef Jean Francois Piege, also of France, tweeted: “An immense chef, an immense sadness, thoughts go out to his family and his team.”

Violier's death was not, however, the first suicide of a renowned French chef in recent years while several others have closed their restaurants, citing high levels of pressure.

In the darkest such episode, Bernard Loiseau apparently committed suicide in 2003 after the Gault & Millau guide lowered his restaurant's rating.

Four Michelin three-star chefs, meanwhile, closed down their restaurants from 1996 to 2008.