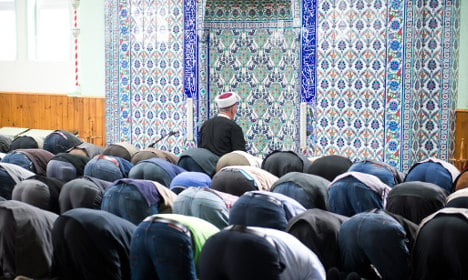 Photo: AFP
“How would you feel if your daughter married a black person? A Jew? A Muslim?”
Questions like these appeared in a new survey that was commissioned by the Jewish Foundation of France on the topic of “living together” in France.
The survey, carried out by Ipsos over 18 months from July 2014 and then published on Sunday by French weekly Le Journal de Dimanche (JDD) comes at a time of heightened tensions following the terror attacks on 2015.
The responses suggested, not for the first time, that France appears to be ill at ease with its diversity, in particular the presence of Europe's largest Muslim community.
'Muslims responsible for poor integration?'
Almost 90 percent of respondents blamed poor Muslim immigration on the Muslims themselves, claiming that it was their fault for “refusing to be open to society”.
In fact, 27 percent of respondents thought the majority of Muslims were “poorly integrated” in the first place.
A total of 53 percent responded that they would be “annoyed” to see a woman covering her face with a veil in public, an act which was banned in France over five years ago.
When asked how they'd respond if their daughter married a Muslim, 56 percent said they would “react badly”.
The survey also proved uncomfortable reading for France's Jewish community, with old clichés showing no sign of dying out.
Some 56 percent of respondents said they believed the typical Jew is richer than the average French person, and 60 percent said that the Jewish community was partly responsible for the rise in anti-Semitism.
Thirteen percent also said that were too many Jews in France.
The survey also revealed a collective pessimism among respondents when it came to France in general.
Some 79 percent of people said they thought France was “on the decline”, with 61 percent saying the future looks “murky”.
54 percent of respondents said immigration did not “enrich” France, while 30 percent of people said “a racist reaction can be justified”.
Around two thirds of respondents said that “you can't trust most people in daily life”.
'An odious poll'
But almost as controversial as the results was the poll itself, which saw over 1,000 random people interviewed, with their results blended in with those of several hundred members of the Jewish and Muslim communities.
The polling method was the main source of controversy for both its choice of questions and the fact that the pollsters sought out Jews and Muslims to respond.
Ariel Goldmann, the president of the Jewish organization behind the study, admitted to hesitating before publishing the survey, but said it was intended to “help fight prejudice”.
“This study is neither accusatory or generalist. It is more of a measure of the ills that plague us as French people,” he said.
Others took to social media to point the finger at what at least one user called a “shameful” poll.
Gérald Darmanin, the mayor of Tourcoing in northern France, questioned why the survey was ever published.
“Being a Muslim, a Jew, or a Catholic is a belief – not a 'type' of person,” he wrote on Twitter.
Nathalie Goulet, the senator vice-chairwoman of the foreign affairs committee, called on the minister of justice to launch an investigation into the newspaper that published the survey, which she referred to as “odious”.
Her tweet, below, includes a shot of the response to the question: “In the past year, have you personally been faced with problems (such as insults or aggression) from the following groups?”
The response column then lists north Africans, Roma, Muslims, Catholics, Jews, and Asians.

France has seen a troubling rise in attacks on Muslims, Jews, and churches in the past year.
Hate crimes against Muslims tripled last year alone, while anti-Semitic assaults remained at an already “high level”, and attacks on Christian sites rose by a fifth, French officials announced last month.
While the method may have been questionable it's not the first poll to suggest that France has any issue with Islamophobia and anti-Semitism.
In April last year, the french government decided urgent steps needed to be taken and launched a plan to fight “intolerable” racism in the country.
“Racism, anti-Semitism, hatred of Muslims, of foreigners, homophobia are increasing in an intolerable manner,” said PM Manuel Valls at the time.
Valls's plan came just two months after a damning report from the human rights watchdog The Council of Europe which concluded that the French public are becoming more racist and more intolerant towards minorities.