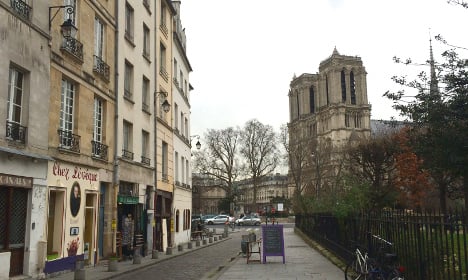 What's the perfect street in Paris?

It’s a tough question to answer for a city full of historic cobblestoned streets all overflowing with charm and character.

But according to American journalist, Elaine Sciolino, it’s the Rue des Martyrs in northern Paris, just south of the Basilica of Sacré Coeur in Montmartre. She feels so strongly about this little slice of the city that she's written a book about it: The Only Street in Paris: Life on the Rue des Martyrs.

But The Local asked bloggers, authors, and tour guides in Paris to make their own choice. Here are ten of their favorite streets that can give Rue des Martyrs a run for its money.

This street is lined with market stalls daily (except Monday), butchers, some excellent cheese shops and fish markets, and a Portuguese shop that has terrific charcuterie and olive oil in bulk.

The Arab épicerie, Sabah, is where I get most of my nuts and dried fruits (and feta). And there's even a coffee roaster with a counter outside, so you can sip your café express if you need to take a break and watch the other shoppers fill their baskets. Anything you want in Paris that's edible, you can find on this lively street.

Quai de la Loire in the 19th is hedonistic Paris at its best – whenever the sun shines, the canal banks host picnics and pétanque parties. At one end there's a cinema, at the other a pub that brews its own beer and has a glorious view along the Bassin de la Villette, where cormorants fish and fitness freaks row. It's a fun-loving Parisian village that's traffic free. Perfect.

My vote is for the rue Saint-Jacques, the oldest street in Paris. It was an ancient Roman road. It has some of the city’s most interesting landmarks: Cluny, the Sorbonne, the Panthéon. Near the Val-de-Grâce church, you’ll find a host of lovely boutiques like Bass et Bass (children’s toys) and a boulangerie where tantalizing treats are arranged in the window.

There’s intrigue, too, such as the Santé prison, where notorious prisoners like Carlos the Jackal were incarcerated. Plus, historian Graham Robb has described the sinkholes that appeared in the 18th century because of the underground quarries (today’s catacombs).

This road shows off the charm of the beautiful Saint Germain area, the oldest part of Paris, with its medieval cobbled streets, eclectic architecture and a spectacular view of Notre Dame Cathedral. This is a lovely local spot to hang out, dotted with charming cafés and the city’s most famous English bookstore, Shakespeare & Company. We also love to stroll through the bordering René Viviani park, home to the oldest tree in Paris!

It’s also pleasingly un-Haussmannian, a medieval strip hiding tiny villages peopled by actors and designers behind its doorways. It was one of the streets targeted in the November 13th attacks, but unsurprisingly, also the first to bounce back.

And it's perhaps the perfect example of the city's diversity; Parisians who have lived in the area for decades, foreigners, Jews, Muslims, young and old. It has tremendous character thanks to the businesses that have set up shop here and the locals who frequent them.

This one-block street was designated by the city to only have shops with either hand crafted or hand made merchandise. One of the highlights is the proliferation of paper shops, four in total (my favourites are Melodie Graphiques and Calligraine).

The street also has some funky jewellery and accessory shops, a boutique with hand-knitted sweaters, and an antique musical instrument shop. Architecturally, there are a series of doors with stunning, intricate ironwork.

A homey blend of hip locals and English-speaking expats, lined with renowned foodie hangouts and a vibrant international vibe. Unbuckle your belt and start with two iconic breakfast and brunch spots: Pancake Sisters and Holybelly. Wash it down with coffee at Le Poutch or a Brooklyn-style cleanser at Bob’s Juice Bar.

This is a tiny winding road you’d miss on a map that is tucked between the Seine River and Place Maubert. It used to be called Rue Perdu – the lost road. Legend has it that students heading to school would traverse this road and disappear forever. It was also the street rumoured to have ‘witches’ practising alchemy and occult magic, and was once home to Marie Antoinette’s court jester.

It has the best bar in Paris, the Onze bar with Aswa whose family has owned it for generations and the place has remained unchanged for at least 100 years. What makes a road special is the people that inhabit it and this road has a cozy village-like feel with the benefit of being right next to the river; everyone stops to smile and greet you.

In the 11th arrondissement near the square Gardette hides the Passage Rochebrune: a charming passage maintained with lots of flowers by its inhabitants. You can enjoy exquisite pastries at Broken Biscuits, freshly baked by the Irish Masterchef contestant Christine O'Sullivan. She has become the supplier of the coolest coffee shops in Paris including Honor and Fondations. For its calmness, absence of cars, and a wander in one of the most Parisian of streets while enjoying a slice of cake, take time to stop at Passage Rochebrune.

It feels like a small village far from Paris. There's the “marché des enfants rouges” markets, where Monsieur Régault's fruit and vegetable produce stand is a feast that should not be missed on Wednesdays and Saturdays. For street food, couscous, oysters, and organic crepes are all worth a try.

Paris history is everywhere – check out the town hall, where blue marks on the ground show where the dungeon of the Knights Templar once stood.

There's drama, good food, and fashionable people by the dozens – what's not to like on Rue de Bretagne?

Sadly, Paris Mayor Anne Hidalgo did not respond when The Local asked for her favourite street.