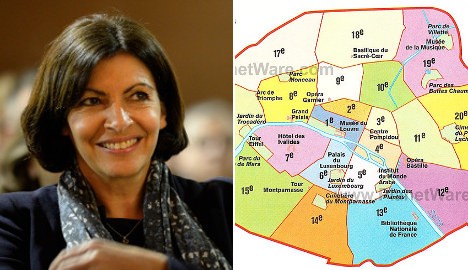 Mayor Anne Hidalgo wants to shift the boundaries of Paris's arrondissements or group them together. Photo: AFP/Brad Cerenzia/Flickr
The mayor said that the plan, which she wants to come to fruition by 2020, would see the 1st, 2nd, 3rd, and 4th arrondissements become one.
The move is intended to allow a “better democratic representation” for Parisians, the mayor's team wrote in a document seen by Le Monde newspaper.
The move would allow “the unification of political representation and the administrative organization of the least populated arrondissements”, the Town Hall wrote, adding that just one mayor would be responsible for the merged areas.
Hidalgo stressed that the change wouldn't affect the postcodes of the first four arrondissements, or indeed the other 16 in Paris.
In other words, you could still say you lived in the 2nd, even though it wouldn't exist as an administrative entity anymore.
Paris is divided up in to 20 districts in the form of a clockwise spiral, which is often likened to a snail’s shell.

The 1st arrondissement is in the middle of the city on the right bank of the Seine, and includes the famous Louvre art gallery and Place Vendôme. The arrondissements curl round until the 20th on the eastern edge of the city. Hidalgo's move would – which was first brought up in September last year- would reduce the discrepancies between the services available to the public in each arrondissement.

According to one guide, there are just four municipal nurseries in the 3rd arrondissement but there are 40 in the 13th, although it should be said demand for a place in the 3rd is far lower because its smaller population means fewer families live there.

Whether the plan will become a reality or not will be decided in mid-February.

READ ALSO: Facts you need to know about the Paris arrondissements