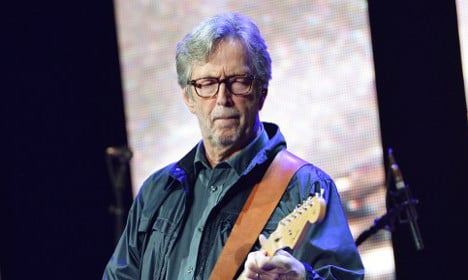 Photo: AFP
Clapton, one of Britain's most influential musicians in recent decades, was taken to court by the family of French-Danish artist Emile Frandsen, who died in 1969.
They accused Clapton of using an altered version of Frandsen's painting as part of a collector's edition in 2011, the 40th anniversary of the album's initial release by the musician's band Derek and the Dominos, the court sentence read.
The cover of the anniversary edition featured a new three-dimensional, cardboard pop-up version of the original work named “La Jeune Fille au Bouquet” (Young Girl with Bouquet), which the painter's son had given to Clapton in 1970.
“It's a clear distortion of Emile Frandsen's work,” the court said.
The original had been used on the album cover of “Layla and Other Assorted Love Songs” several months later.
The court meanwhile struck down the family's demands for compensation over the musician's use of the painting on the original cover.
Antoine Gitton, the lawyer for Frandsen's daughter, said she would appeal the decision.
He said she believes the court should punish Clapton more severely for using the painting in the first place without the artist's consent.
“Layla” is one of Clapton's signature songs, along with other hits such as “I Shot the Sheriff” and “Tears in Heaven.”
The 70-year-old was named by Rolling Stone magazine as one of the greatest musicians of all times in 2004.