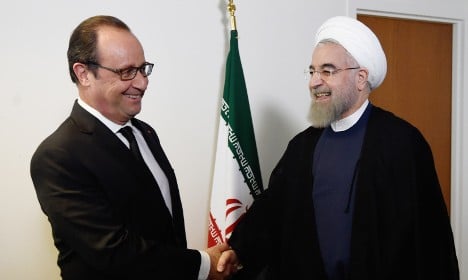 Photo: Charles Platiau/AFP
A commitment for Tehran to buy 118 Airbus aircraft was the most eye-catching of the deals that also included agreements for carmaker Peugeot to return to Iran and for Total to buy Iranian crude oil.
“A new era in our relationship starts today,” Hollande said at a press conference with Rouhani.
The Iranian president called earlier for both countries to take advantage of the “positive atmosphere” following the lifting of sanctions over the Islamic Republic's nuclear programme.
“Let us forget the resentment,” Rouhani said. “We are ready to turn the page” and establish a “new relationship”, he said.
French Prime Minister Manuel Valls said Iran “can count on France”.
Rouhani was welcomed to Paris with military honours and national anthems before addressing business leaders.
Deals agreed Thursday included a $25 billion (€22 billion) accord under which Iran will purchase 73 long-haul and 45 medium-haul Airbus passenger planes to update its ageing fleet.
The countries signed a memorandum of understanding because the aircraft deal cannot be finalized until sanctions are fully lifted.
“The sky has brightened for Iranian passengers, and Airbus is pleased to welcome the return of Iran to the international civil aviation community,” said the boss of the European aircraft maker, Fabrice Bregier.
Carmaker Peugeot said it will return to the Iranian market in a five-year deal worth €400 million ($436 million).
Peugeot will produce 200,000 vehicles a year in a joint venture with local manufacturer Iran Khodro, according to a statement.
The French carmaker was forced to pull out of Iran in 2012 as sanctions began to bite.
In another bonanza for France, oil giant Total agreed to take between 150,000 and 200,000 barrels of Iranian crude a day.
Also, Aeroports de Paris and Bouygues SA agreed to help build a new terminal in Tehran, with Vinvi SA signing to help renovate two Iranian airports.
Other companies to sign deals with Iran on Thursday included container line CMA CGM SA, pharmaceutical company Sanofi, and Suez Environnement Co.
Human rights reminder
While the French state rolled out the red carpet for Rouhani, hundreds of people held a demonstration in Paris protesting against Iran's human rights record.
Speakers noted that around 2,000 people have been executed in Iran since Rouhani came to power three years ago.
Maryam Radjavi, president of the National Council of Resistance of Iran (CNRI), condemned Rouhani's “facade of moderation” and said he was “implicated in all the atrocities of this regime and as a result should be brought to justice for crimes against humanity”.
Hollande himself said he had reminded Rouhani that France was “committed to human rights”.
Rouhani's talks with Hollande also touched on Iran's role in Syria, where Tehran is backing President Bashar al-Assad in a war that has killed 260,000 people.
With talks on the conflict due to begin in Geneva hanging in the balance, Hollande called for them to start as soon as possible.
“We urgently need to put in place humanitarian measures and negotiate a political transition. It is possible,” Hollande said.
Earlier, Rouhani referred to Iran's bitter feud with regional rival Saudi Arabia, telling an audience in Paris that “some countries had wanted to use terrorism for their own means”.
“But this is a hand grenade with the pin removed,” he said.
Rouhani had begun his European visit in Italy, where he sealed deals for steel and pipelines worth between €15 and 17 billion and visited Pope Francis at the Vatican.
Rouhani, a 67-year-old former academic and diplomat who is seen as a pragmatist, was elected on a pledge to end sanctions and improve relations with the West.