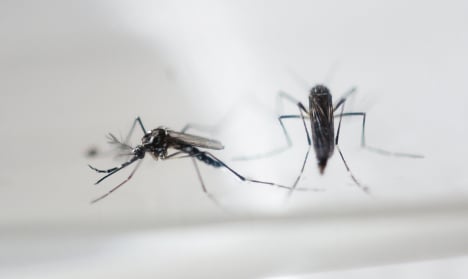 The Zika virus has spread through Latin America. Photo: AFP
Touraine strongly advised pregnant women in France not to head to France's overseas territories, which include French Guiana and the islands of Martinique, and Guadeloupe, which are popular with French holiday makers.
“This is a serious epidemic and I want to voice my concern,” she told France Info radio on Thursday.
“I very strongly urge pregnant women in mainland France to postpone their trip if they're planning to go to Martinique, French Guiana, or the other overseas territories.”
Zika, the world's latest health scare which is sweeping Latin America, is a mosquito-borne virus that has been linked to birth defects in babies born to infected women.
Experts say the virus is connected to a recent surge in microcephaly, a condition in which babies are born with abnormally small heads. The defect can cause brain damage and death.
The outbreak has led authorities in some countries to urge couples not to get pregnant at all.
There have only been a handful of reported cases in Europe, including in Denmark after a Danish tourist returned from South and Central America with the virus.
Still, it's “only a matter of months” before the virus could hit France, according to Anna-Bella Failloux, the director of research at the Institut Pasteur, which has worked closely with the virus abroad.
She told the Le Parisien that by May conditions will be right for France's Tiger Mosquitoes to start hatching. Scientists are already carrying out tests to find out if strains of the virus can be found in France's Tigers Mosquitoes, which are mainly found around southern France.
Here are some questions and answers on the virus. Photo: AFP
What's Zika?
The virus was first identified in a monkey in Africa in 1947. Its name comes from a forest in Uganda where the first infected rhesus monkeys were found. Within several years the virus had jumped to humans in Uganda and Tanzania, according to the World Health Organization (WHO).
Like dengue fever and chikungunya, two similar diseases, Zika is transmitted by mosquito species found in tropical and sub-tropical regions: Aedes aegypti and Aedes albopictus, or tiger mosquitoes.
How do I know if I have it?
In 70 to 80 percent of cases, the disease goes unnoticed. The symptoms resemble a mild case of the flu — headache, muscle and joint pain, and mild fever — plus a rash.
Symptoms usually last two to seven days.
Why are experts worried?
The disease is suspected of causing two serious complications: neurological problems and birth defects in babies born to infected women. But while there appears to be a connection with Zika, researchers have not definitively confirmed a causal link.
The main neurological complication is Guillain-Barre syndrome, a disorder in which the immune system attacks the nervous system, causing weakness and sometimes paralysis.
Most patients recover, but the syndrome is sometimes deadly. Cases linked to Zika have been reported in Brazil and French Polynesia.
Microcephaly and other brain deformities in newborns have also been reported, particularly in Brazil. Microcephaly cases in the giant South American country surged from 163 per year on average to 3,893 after the Zika outbreak began last year. Forty-nine of those babies have died. A municipal agent at the Sambadrome in Rio de Janeiro, Brazil. Photo: AFP
What's the treatment?
There is no vaccine for Zika, and no specific treatment — patients simply take pain-killers and other medication to combat the symptoms.
The virus is transmitted through mosquito bites, so prevention entails fighting mosquitoes and avoiding contact with them. Health officials recommend covering up, using insect repellant and keeping windows closed or screened.
Authorities have responded to the outbreak by fumigating and cleaning up the standing water where mosquitoes breed.
Authorities in Brazil, Colombia, Ecuador, El Salvador and Jamaica have advised couples to avoid pregnancy for the time being.
In Brazil, authorities have announced a crackdown on mosquito breeding grounds ahead of the Olympics, which will bring hundreds of thousands of travelers from around the world to Rio de Janeiro in August.
Where is Zika now?
The virus was first reported in Africa, Asia and the Pacific before leaping to the Americas last year.
It is now spreading locally in some 20 Latin American and Caribbean countries, as far north as Mexico. Brazil has been the hardest hit.
Travelers have also brought it back to the US states of Florida, Hawaii and New York. A woman in Hawaii gave birth to a baby with microcephaly after traveling to Brazil.
So far there have been no locally transmitted US cases reported, though the Aedes aegypti mosquito's habitat stretches into the United States.
The European Centre for Disease Prevention and Control (ECDC) says on its website that “there is no evidence of transmission (of) Zika virus in Europe to date and imported cases are rare.”