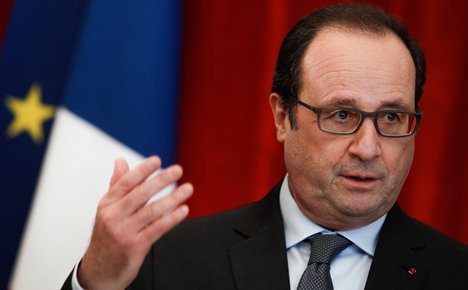 France's President Francois Hollande . Photo: AFP
The woman – Jacqueline Sauvage – has become something of symbol for abused women in France after she was given a ten-year sentence for murdering her husband of 47 years.
Sauvage, 68, and her lawyers insist that the act was self defence, but the plea didn't see her escape jail.
The case is a complicated one, with the court essentially ruling that Sauvage's fatal shooting of her husband wasn't “proportionate” to her husband's attack on that day, as he had only allegedly thrown a door handle at her.

She shot him three times in the back, which the court decided – after five hours of deliberation – was not an acceptable response to the act of throwing the part of the door.
Crucially, the court also noted that neither Sauvage or her four children had ever come forward to authorities about the forty plus years of alleged rape and abuse that they all claimed to suffer. They were also unable to provide medical proof of the rapes and beatings.
France does not respect the “battered woman defense” as courts in some countries do, such as Australia or Canada. In other words, a woman who has been suffering for years at the hands of her husband couldn't possibly get away with killing their spouse, unless they were a victim of a serious at the time.
Ever since Sauvage was sent to prison in December, public anger has been simmering – and in recent days it has reached boiling point.
The public has gathered en masse to try and get the 68-year-old freed with a presidential pardon – “une grâce presidentielle” – which is rarely used and dates back centuries.
A petition addressed to President François Hollande calling for the pardon has racked up over 380,000 signatures and counting.
“This situation is symptomatic of the cases of women and children who are victims of violence in our country today, despite all the efforts being made,” the petition reads, noting that 134 women are killed at the hands of their husbands each year in France.
And earlier this week, Feminist group Femen staged a head-turning publicity stunt as they literally tried to dig the woman out of her prison in Orleans, central France. They were all topless at the time, helping the story and Sauvage's case to hit television screens across the country.

Politicians including the likes of Paris Mayor Anne Hidalgo and former Prime Minister Francois Fillon have shared their support for Sauvage, as have many high-ranking and well-known members of French society.
And the pressure has finally reached Hollande, according to a member of his entourage.
The source told the Le Parisien newspaper that the public backlash “hadn't escaped” the president's notice, but that “legal procedures had to be respected”.
The source added that it takes “extraordinary circumstances” for people to be pardoned.
But that doesn't mean that Hollande isn't considering it. The Elysee Palace said on Thursday that Hollande will meet with Sauvage's three daughters and lawyers on Friday.
And with Hollande's popularity ratings low as usual, a pardon for Sauvage could prove to be just the ticket to win support as the long march towards the 2017 national elections begins.
Url copied to clipboard!