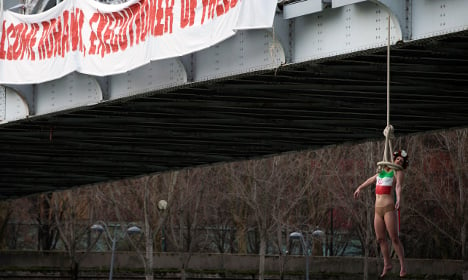 Rouhani is in Paris on a historic visit to France organized after a deal was struck with the west over its controversial nuclear programme.

But while Rouhani himself is keen to highlight the business opportunities in Iran, members of Femen, who call themselves “sextremists”, had other ideas.

They wanted to highlight Iran’s record on human rights and in particular the number of people put to death each year in Iran. And the group went to extreme lengths to offend Rouhani, fresh from a visit to Italy where naked statues had to be covered up to spare his blushes.

To prove their point, Femen staged a mock hanging over the River Seine, not far from the Eiffel Tower.

With an Iranian flag painted over her naked breasts, images showed a woman hanging from the bridge as barges and tourist boats passed underneath.

The stunt was carried out to coincide with the passing of Rouhani's cortege. It is not clear whether the Iranian president caught a glimpse of the the semi-naked protester.

As she hung from the Debilly bridge, supported by ropes, above the Seine a banner was unfurled that read: “Welcome Rouhani, Executioner of Freedom.”

Police moved in quickly to lead the protester away and they confiscated the banner.

Rouhani himself called on Thursday for a new relationship with France as he met business leaders on a trip to Paris to revive economic ties after sanctions on his country were lifted.

“We are ready to turn the page” and establish a “new relationship between our countries”, Rouhani said at a meeting organized by the Medef employers' association.

“Let us forget the resentment,” he said, calling for all sides to take advantage of the “positive atmosphere” after the removal of the sanctions.

A raft of commercial deals are expected to be signed during Rouhani's visit.

French carmaker Peugeot announced its official return to Iran with a deal to produce 200,000 cars a year, and Rouhani is expected to announce Tehran's intention to buy more than 100 passenger planes from European aircraft maker Airbus.