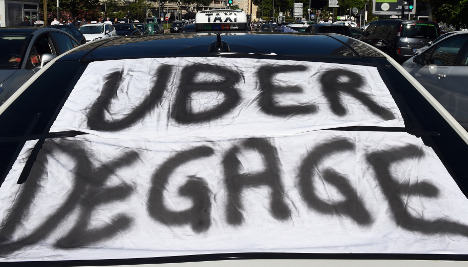 The American company must pay the National Union of Taxis, according to documents seen by AFP on Wednesday.

The payment followed a complaint that Uber drivers were acting as traditional taxis — waiting in the street in the hopes of picking up passengers.

Uber France was accused by the UNT of being “ambiguous” in its communications with drivers about the rules for private hire cars, which under French law are supposed to head back to their garages after each fare, rather than park or circulate on public roads.
Uber denied the charges, saying it “regularly informs” its drivers of the need to return to their garages after a journey.
The news come as French taxi drivers push into their second day of striking against what they say is “unfair competition” from companies such as Uber, which may have taken up to a third of their business.
READ ALSO: The latest on the national strikes in France