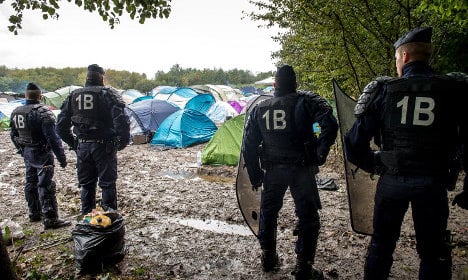 According to police reports around 40 shots were fired during a gang fight at the Grande-Synthe camp near Dunkirk on the northern French coast, which is home to around 2,500 migrants.

Four refugees were injured, two from being shot, one from being stabbed while the fourth victim was bludgeoned, reports say.

Their injuries were not believed to be life-threatening.

“A squadron of gendarmes were at the camp on Tuesday afternoon and heard around 40 shots fired, according to their estimations,” David Michaux a representative from the union UNSA-Police told Le Figaro newspaper.

He said hundreds of riot police and gendarmes were quickly deployed to try prevent the shooter from getting away, although other reports said police waited for reinforcements to arrive before entering the camp.

Officers carried out searches of the tents on the site to try and locate any weapons, but given the nature of the camp, which is spread out across a wooded area, their job was difficult.

The Grande-Synthe camp is mainly home to Iraqi Kurds.

According to reports in Le Figaro the shooting was related to a gang fight between groups divided on religious grounds, but other reports suggest the violence was a dispute between two rival gangs of people smugglers, one from Lebanon, the other Afghani.