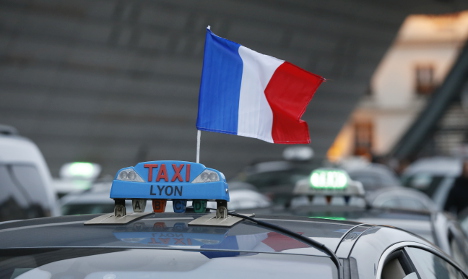 Photo: AFP
First thing's first, we know there are some lovely taxi drivers in France, who act like an old mate, are delightful to talk to, and who will even carry your bags for you.
But their reputation is in tatters, not least this week as they cause mass delays across the country while striking against “unfair competition”.
Here's why people love to hate them.
1. They strike. And often.
How can you sympathize with a group of people who burn tyres and block roads so common people can't get to the airport on time? There's withdrawing your labour – and then there's being difficult about it.
They seem to take out their anger on ordinary members of the public, many of whom are their paying customers, or at least used to be.
Talk about biting the hand that feeds you.
And let's not forget they were on strike as recently as June (see pic below). 2. They are violent strikers
“It is hard to feel sympathy for someone throwing rocks at your car!” writes one reader of The Local.
Another, Chris Balchin on The Local's Facebook page, says the “violence and destruction” needs to be banned. “It's not the revolution anymore,” he says.
We've seen mob beatings, burning tyres, and taxi drivers literally turning over cars or pulling tourists out of other vehicles. Or, like in the video below, we've seen huge concrete blocks thrown at cars from bridges.
3. They're expensive
A taxi ride in France can cost up to double the price of an Uber, even when they take exactly the same route. We have the receipts to prove it!
Several tweeters told us that the price was the main reason they didn't like French cabs.
4. What, no card payments!
Many taxi drivers won't accept card payments, and if they do, they can often do it reluctantly. And you'll be made to feel like a receipt is the biggest hassle in the world. Yes, cash is king. And you'd better have the right amount, or….
5. Forced tipping
It's not really customary to tip in France, especially not with taxi drivers. Especially not after they've added on all the extra costs, like €1 for each bag in the boot.
But in one of the biggest mysteries, in Paris at least, no taxi driver has ever had any change to give you when you hand over your €10. Don't be surprised, even though they operate with cash all day (see point 4).
The drive was already expensive, now be prepared to be guilt-tripped into paying a bit more. Photo: David McKelvey/Flickr
6. Where are we?
While taxi drivers generally know their way around, don't be surprised if your driver pulls over and fumbles through a road map to find the way.
Or they will check your knowledge of the area by asking you the best way to go, when they know full well which route to take.
If you don't know, just accept you are going the long way round.
It's 2016 – surely they should have a GPS. Anyone with a phone does, nowadays.
7. Tourist trickery
Especially in Paris, taxi drivers have a reputation of going the longest way possible. And they'll be somehow unable to get you to your destination quickly, or will be unable to negotiate the maze of one-way streets, or may even get lost. This doesn't look like the way to the Eiffel Tower… Photo: Olivier Ortelpa/Flickr
8. The ghost driver
If you leave your brand new pair of shoes in the back of a taxi, and realize ten minutes after you get out of the car… what are you going to do?
You can try and call the company, but good luck. Those shoes are gone. The driver has disappeared, like a ghost. However, with many private cabs services, like Uber, you'll be able to just call the driver whose number and whose details are already in your phone.
9. The great unknown
When you wave down a taxi in Paris, you might be getting in a smokey, smelly car with a grumpy and equally smelly driver sitting on a wooden-ball-massage-seat cover, who is certainly going to take you around the houses and expect you to tip him after.
In some services, like Uber, the drivers are already rated. Don't like the look of them? Don't book. Photo: AFP
10. No customer service/care
Rude, moody, always listening to football. These are age-old complaints about taxi drivers.
Have you ever complained about a bad taxi ride and got a refund? Or an apology? We doubt it.
Some VTCs, which is how the French refer to private hire firms, will refund you if you've had a considerable problem, or even give you vouchers for your next trip. And the process is often painless and simple.
But to hear their side of the story, click on the link below
French taxi drivers: We want égalité and deserve solidarité