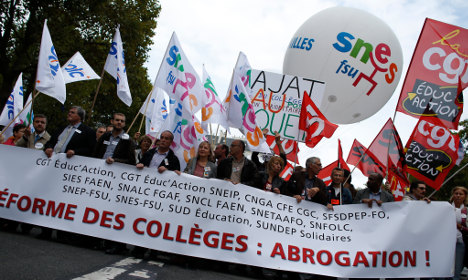 Most of the disruption on Tuesday looks set to be caused by French taxi drivers whose “forceful” protests will see them hold “go slows” around airports and in the centres of cities.

Taxi drivers have a longstanding grudge against what they see as unfair competition from the likes of Uber and other private hire firms known as VTCs in France.

While last June’s violent protest by taxi drivers was directed against the now banned UberPop service, Tuesday’s show of strength is in anger at the government’s failure to enforce laws designed to protect their industry.

A raft of rules were brought in to prevent VTCs from encroaching on taxi drivers’ turf, such as a ban on them picking people up on the street or waiting at airports unless they had a booking.

But taxi driver unions say these laws are not being enforced and as a result their takings have nosedived dramatically and their livelihoods are threatened. French air traffic controllers have been fairly frequent strikers in recent years and they still have major grudges against the government. With the two major unions calling for a walk-out, between 20 and 50 percent of flights to and from France are set to be hit.

The unions are demanding for more controllers to be recruited to relieve the burden on overworked staff, who, to be fair, have to concentrate pretty hard while they are working. They say air traffic has increased dramatically, but there hasn’t been the same rise in the number of controllers.

“If this continues we will no longer be able to deal with the rise of air traffic,” said union leader Olivier Joffrin.

Unions are also angry at what they see as a lack of “social dialogue” – which means talks between unions and civil aviation bosses at the DGAC – as well as a drop in their “spending power”, something highly valued by French civil servants.

The controllers' unions want to be exempted from proposed changes to how salaries are calculated, which they say would hurt their purchasing power.

Controllers have tried to fight against the perception that they have it easy.

“We are not privileged. We are only the only ones who take the risks in air transport,” said one union leader.

Public sympathy level: 5/10 – Many see them as having an easy job, plus no one likes to have their flight cancelled. But then again they are kind of handy. Three unions representing civil servants have called a strike which is set to see many of France’s 5.6 million “fonctionnaires” walk out.

All kinds of public institutions will be hit from hospitals in Paris to tourist attractions like the Chateau de Versailles, which won’t open on time on Tuesday.

Essentially unions denounced a pay freeze that has been in place since 2010 as well as a loss of jobs in key sectors.

The leftist FO union says that, with inflation, the July 2010 freeze on the index used to calculate salaries has cost civil servants eight percent of their purchasing power.

The striking unions also denounce job losses totalling some 150,000 since 2007 and say the hospital sector is especially in need of new jobs.

Civil Service Minister Marylise Lebranchu said unfreezing the index would not be enough to satisfy the unions.

Public sympathy level: 7/10 Most of France likes their civil servants, indeed many French ARE civil servants and no one likes a five-year pay freeze. Teachers have been regularly involved in industrial action in recent years.

Kindergarten and primary school teachers are striking for higher pay. About a third of them, or 100,000, are expected to take part, according to their union, which predicts a stay away rate of up to 45 percent in Paris.

Middle school teachers are also protesting against the the education ministry’s reforms of “colleges” as they are known in France.

The reforms includes controversial measures such as cuts to language classes.

The main parts of the reform that have proved controversial are giving more autonomy to schools and replacing Latin and Ancient Greek languages classes with more general lessons on ancient civilization and culture.

Public sympathy level: 5/10 – Many admit reforms need to be carried out and while many middle class parents lament the loss of language classes, parents have failed to mobilize behind the teachers. Tuesday travellers may also encounter roadblocks set up by a different set of protesters: farmers upset over falling prices.

Some 200 farmers in the Reims area east of Paris set up roadblocks on major arteries on Monday in solidarity with livestock farmers in Brittany, who resumed their protests after suspending them for the weekend, blocking roads with tractors and burning tyres.

The farmers' unions are demanding that distributors and major food companies pay equitable prices for their produce and livestock.