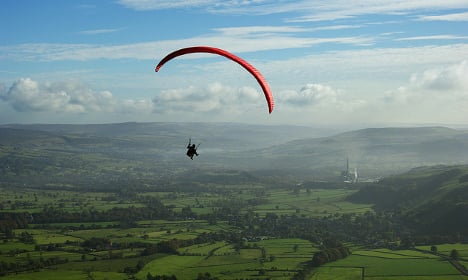 The elderly daredevil was spending the afternoon paragliding around the southern Haute-Garonne department, when disaster struck. A blast of cool air sent him plummeting downwards – straight into the branches of a tree.

The tree broke his fall, but with the wing of his glider entangled in the branches, the man found himself stuck eight metres above ground.

Luckily, the pilot of another glider spotted the pensioner and immediately alerted local police.

Emergency crews were able to locate the man, who was miraculously unharmed as he dangled above the ground, reported La Depeche du Midi newspaper.

“He waited patiently for us, sitting in the hot seat,” a police spokesperson told the paper.

The rescue operation was extremely delicate, but emergency crews managed to reach the Frenchman using ropes, and he was eventually back on the ground.

He was then taken by helicopter to safety.

The 70-year-old's own account of the incident was matter-of fact: “This afternoon, everything was going very well, the warm air was lifting me up so I took the opportunity to make several trips.

“Suddenly, I collapsed, caught in a stream of cold air. I landed in a tree.”

“I fly here very often,” he explained. “The conditions at this time are sensational.”