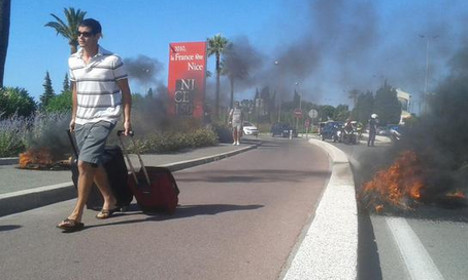 CLICK HERE FOR ALL THE LATEST ON TUESDAY'S STRIKES Taxi drivers are set to protest once again over what they see as unfair competition from private hire cabs and the government’s inability to enforce laws designed to protect their industry.

The taxi protests could see the roads around airports blocked from early Tuesday morning as well as part of the the péripherique ring road around Paris.

Taxi union chiefs have called for the protest to be held peacefully, after similar protests in June last year spiralled into violence.

“A violent protest would be counter-productive,” said Thierry Guichard, head of the Taxis de France collective.

On the eve of the strike French cabbies arch enemy Uber made what was seen as a provocative move by offering to open up their platform to taxi drivers, rather than just their own Uber drivers.

And air traffic controllers are also due to strike, which could impact on up to 50 percent of flights according to reports.

However French aviation chiefs said on Monday they believe only 20 percent of flights will be hit, however that would still mean disruption for thousands of passengers travelling to and from France as well as through French air space.

Air traffic controllers on strike Tuesday 26: please contact your airline to get flight status before coming to the airport. #CDG #Orly #en

Airlines have not yet released information on the flights that will be affected or indeed how many, but passengers are advised to keep an eye on their websites.

The controllers' unions want to be exempted from proposed changes to how salaries are calculated, which they say would hurt their purchasing power.
They also denounce the loss of some 1,000 jobs in less than 10 years.Farmers who have been blockading roads in the west  of the country in protest against falling prices could also cause further disruption if they decide to continue their action.

The strike has been called by public service unions as a “day of action” against a loss of spending power and cuts to jobs.

Meanwhile France's some 5.6 million civil servants have been called to down tools in Paris and other cities to protest against labour reforms proposed last September affecting pay and career advancement.
The leftist FO union says that, with inflation, a July 2010 freeze in automatic pay increases has cost civil servants eight percent of their purchasing power.
The striking unions also denounce job losses totalling some 150,000 since 2007, mainly before  2012, and say the hospital sector is especially in need of job creation.