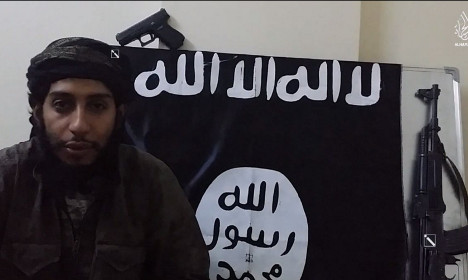 The Islamic State group released a video on Sunday purporting to show nine jihadists behind the November Paris attacks that killed 130 people, in which they threaten “coalition” countries including Britain.

The video posted on jihadist websites is entitled “Kill wherever you find them”, and shows four Belgians, three French citizens and two Iraqis said to be responsible for the attacks.

In it the jihadists, speaking in French and in Arabic, say their “message is addressed to all the countries taking part in the (US-led) coalition” that has been fighting IS in Syria and Iraq since September 2014.

The video also shows a picture of British Prime Minister David Cameron accompanied by the words in English: “Whoever stands in the ranks of kufr (unbelievers) will be a target for our swords.”

The video, produced by IS's Al-Hayat Media Centre, describes the nine jihadists as “lions” who “brought France to its knees”.

The footage shows images of the coordinated Paris attacks as well as security operations by French special forces during the onslaught.

It also depicts the nine jihadists carrying out atrocities, including beheading and shooting people described as hostages.

It was not clear why the group released the video more than two months after the November 13 bloodshed in which jihadists armed with guns and suicide belts launched coordinated attacks on Paris bars, restaurants, and a concert hall.

Seven of them died during the attacks and two in a subsequent police raid but the total number of those directly involved is still unclear.

Among the men purportedly shown in the video is suspected ringleader Abdelhamid Abaaoud, identified by his nom de guerre Abu Umar al-Baljiki, or Abu Umar the Belgian.

Abaaoud, who was widely thought to have been in Syria fighting with IS forces in the past, was killed in a shootout with French police days after the bloodiest attacks to hit Europe since the Madrid train bombings in 2004.

Reacting to the video French President François Hollande said: “Nothing will deter us, no threat will make France waver in the fight against terrorism,” the French president told reporters in New Delhi.

“These images only serve to discredit the perpetrators of this crime.”

Hollande has said that the Paris attacks were planned in Syria but prepared and organised in Belgium.

Belgian authorities have formally charged 11 people in the case, including a number from the troubled Brussels neighbourhood of Molenbeek where a number of extremists have stayed over the last two decades.

Four suspects remain at large, including Salah Abdeslam who allegedly drove suicide bombers to the French national stadium outside Paris, as well as Mohamed Abrini, suspected of having helped scout out the attack sites. Both are from Molenbeek.