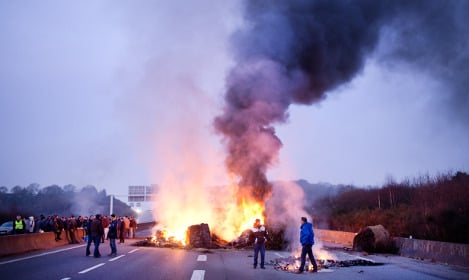 The farmers said the prices of meat and dairy products are too low to make a decent living, and demanded a meeting with Prime Minister Manuel Valls and Jean-Yves Le Drian, president of the Brittany region and Minister of Defense.

In protest, the farmers have burned tyres in the middle of roads across western France, sending billowing smoke into the air and leaving motorists with no other option than to find a different route.

The president of the Morhiban agricultural union, Frank Guéhennec, told France Info that the demonstration “was the only way to be heard and to show the disarray in our country.”

“Since the beginning of 2015, France’s agriculture has felt the full force of difficulties in all production sectors. The financial situation of many farms is becoming critical with more and more farmers who aren’t making a profit,” he said.

The demonstrators used tractors to block off roads, including the N 165 highway in both directions between the cities of Hennebont and Queven in the Lorient.

About sixty farmers have also blocked the N 237 near La Rochelle, as well as access to the city by the N 11 and the bypass.

La Rochelle has temporarily reopened the Vieux Port so drivers can get to work, and some detours have been put in place for motorists, although demonstrations are expected to continue all day.

The demonstrations come a day before France is set to see widespread industrial action that could cause travel disruption across the country.