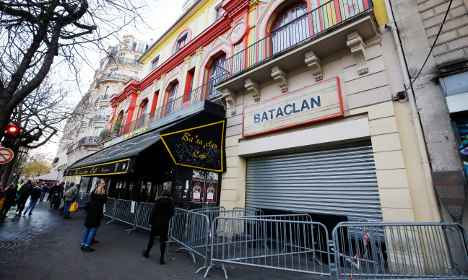 The Bataclan concert hall in Paris, which was targeted by terrorists in the November attacks. Photo: AFP
“One of them was a threat to attack a concert hall, others were threats of mass attacks against the French in the streets or in the cities,” he told France 5 television.
The attacks were of the same type that saw terrorists armed with kalashnikovs kill 130 on cafe and bar terraces and at the Bataclan concert hall on November 13th, Cazeneuve said.
A French jihadist had told intelligence services of an attack at a concert hall when interrogated as he returned to France from Syria.
The man didn't specify exactly where the attack would take place, saying only that it would be in “France or Europe”.
The minister said that the foiled attacks had been ordered by the attackers behind the November 13th massacre in Paris.
France was hit by large-scale terror attacks twice last year – the first in January which saw 17 killed, and the second in November.
Since the second attack, the country has been in a state of emergency, with the government insisting extra powers are necessary given the heightened terror threat.
However there is a growing sense of uneasiness over their loss of civil liberties.
Cazeneuve has frequently spoken of the number of foiled attacks in France, with some critics saying the government are intent on keeping a heightened sense of fear to justify the ongoing state of emergency in France.
But the minister added that the state of emergency would remain in place “as long as there is imminent danger”.
“Let me remind you that not all the terrorists who carried out the November 13th attacks were caught,” he said.
He added that France would be putting “considerable pressure” on other European countries to help fight terrorism together.
“Some of these countries don't think they're going to get hit by terrorism, but they are seriously wrong,” he told the channel.
“It is the European model as a whole that terrorists want to attack.”
Cazeneuve's comments came on the same day that the Islamic State group released a video purporting to show nine jihadists behind the November Paris attacks, in which they threaten “coalition” countries including Britain.
Four suspects believed to be connected to the attacks remain at large, including Salah Abdeslam who allegedly drove suicide bombers to the French national stadium outside Paris, as well as Mohamed Abrini, suspected of having helped scout out the attack sites.