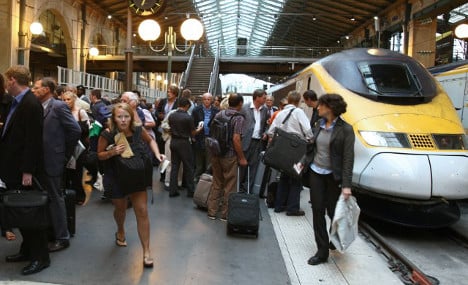 The train was due to arrive in Paris at 8.45pm on Sunday evening but passengers only rolled into the French capital just before 5am on Monday.

Their train was blocked for five hours near the northern town of Arras after an overhead cable caught fire around 8pm. The fire then spread to the roof of the train,

The train driver was able to bring the train to a halt on the track and firefighters acted quickly to put out the blaze before too much damage was done.

But power to the train was cut while the fire was out leaving passengers literally in the dark. Most had no idea what had happened and naturally became anxious when firefighters turned up and the smell of burning could be detected on board in certain carriages.

Eurostar tweeted out information about the incident but the power cut meant the train’s on-board announcement system was not working and passengers were left without information.

A fact which led to nerves being frayed among the 700 passengers and anger being directed towards the train company.

@Eurostar so still no definitive information. What's wrong with your communication? No answers. Disgusting.

@Eurostar stinking over flowing toilets no water. Third world conditions on board. You stink #eurostar

“Passengers are becoming desperate as they predict an arrival around 5am. Still no information on board”,” reads the tweet below.

Passengers complained of the stench from overflowing toilets, young children and the elderly becoming dehydrated and generally the felling of being “abandoned” in the darkness.

After hours of waiting trains turned up to take the passengers to Arras, where another Eurostar was waiting to take them on the final leg of their journey to Paris.

#ES9044 has now arrived in Paris. Our apologies once again for the delay this evening, the day team will be back at 7am to assist you.