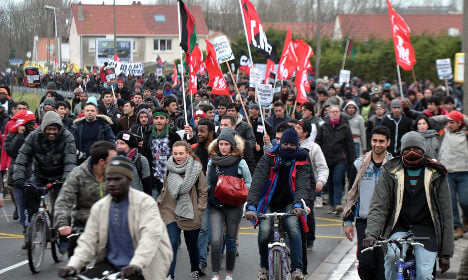 Among the protesters were people from Britain, France, Belgium and Italy. Photo: Francois Lo Presti/AFP

The boarding — a rare occurrence in the heavily guarded port — came after some 2,000 people protested nearby over living conditions in a notoriously squalid camp known as “the Jungle”.

“A group of 500 people forced their way through police lines and headed to the port, and 150 people were able to get into the fenced-off area. Of these, a group of some 50 managed to board a ferry,” the prefecture, representing the French state, official told AFP.

By early Saturday evening, police were still struggling to bring the migrants off the “Spirit of Britain” ferry, operated by P&O.

An AFP reporter said the migrants were blocking the gangway, preventing police from getting onboard.

The company said the ship had just crossed from Dover, on the English side of the Channel, and “a few trucks” were still onboard but there were no passengers when the boarding occurred.

“The proximity of the camp and the unprecedented number of migrants make it impossible to secure the (port) infrastructure, however much the state invests,” port director Jean-Marc Puissesseau told AFP, demanding that the camp be moved elsewhere.

Earlier, some 2,000 protesters had gathered to demand “dignified living conditions” for the estimated 4,000 migrants living in the camp, most of them from North Africa, the Middle East and Afghanistan.

Among the protesters were people from Britain, France, Belgium and Italy.

“We are here in solidarity and to denounce the inaction of the French state, which does not have the will to ensure a better life for the refugees,” said Rino, a 22-year-old student from Italy who had come to Calais by bus.

“No Jungle, no Jungle!” cried migrants who joined in the protests.

“Here, we live worse than animals,” said Wali from Afghanistan.

Baraa, a Syrian refugee, said he was “happy” to see “all these people here to support us.”

“Their presence will make things move,and put pressure on the European Union to make things change here in Calais,” he added.

British opposition leader Jeremy Corbyn meanwhile visited Saturday the neighbouring town of Dunkirk, which is home to another camp named the Grande Synthe.

Corbyn, a veteran left-wing campaigner before becoming Labour leader, said he wanted to “understand the nature of the refugee crisis that's facing the whole of Europe”.

He said that Britain should do more to address the problem.

“We have got people here who have been here for months, if not longer than that, with no proper education, no access to doctors, no access to dentists, limited access to food — in very cold, very wet conditions,” Corbyn said.

“These conditions are a disgrace anywhere. We as human beings have to reach out to fellow human beings.”